Is There Any Evidence to Support the Use of Garlic as a Wormer for Dogs and Cats in the UK?

Intellectual Property Rights
Authors of Knowledge Summaries submitted to RCVS Knowledge for publication will retain copyright in their work, and will be required to grant to RCVS Knowledge a non-exclusive licence of the rights of copyright in the materials including but not limited to the right to publish, re-publish, transmit, sell, distribute and otherwise use the materials in all languages and all media throughout the world, and to licence or permit others to do so.
Disclaimer
Knowledge Summaries are a peer-reviewed article type which aims to answer a clinical question based on the best available current evidence. It does not override the responsibility of the practitioner. Informed decisions should be made by considering such factors as individual clinical expertise and judgement along with patient’s circumstances and owners’ values. Knowledge Summaries are a resource to help inform and any opinions expressed within the Knowledge Summaries are the author's own and do not necessarily reflect the view of the RCVS Knowledge. Authors are responsible for the accuracy of the content. While the Editor and Publisher believe that all content herein are in accord with current recommendations and practice at the time of publication, they accept no legal responsibility for any errors or omissions, and make no warranty, express or implied, with respect to material contained within. For further information please refer to our Terms of Use.
Posted by Cheryl & ethnovet at 12:39

Save the 8 UBC Bosque trees 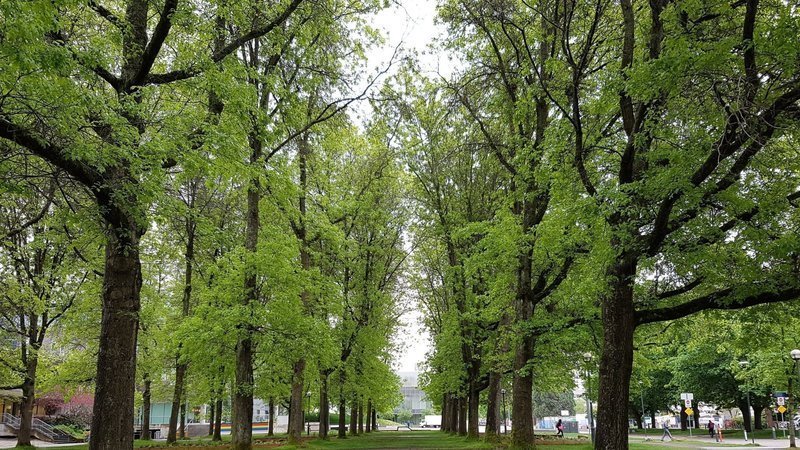 Save the UBC Bosque started this petition to University of British Columbia President's Office and 1 other
We the undersigned do not support the chopping down of the eight mature 60-foot pin oaks in the UBC Bosque for the placement of the new Arts Student Centre building, for the following reasons:
We do not oppose the creation of a new building for the Arts Student Centre, but we do oppose the alteration of the bosque and chopping down of trees to build a structure that could be placed elsewhere.
We call on UBC President Santa Ono and the UBC Board of Governors to intervene in this development process and stop the destruction of these trees.
http://chng.it/WpKNq6pYFB
Posted by Cheryl & ethnovet at 16:01

Abstract
Acute and chronic forms of mastitis are the costliest disease in the dairy industry. Resistance of microbial pathogens to antimicrobials approved for clinical use is a significant threat to controlling mastitic pathogens and is a public health issue. In some countries, the cost of antimicrobial drugs reduces their usage, and ethnic remedies are being used. Organic dairies have prioritized the maintenance of mammary health and the use of nutraceuticals to prevent and treat mastitis. In some jurisdictions, dairy animals on organic farms that receive antibiotics are disqualified for life as dairy animals. There is conflicting evidence on the efficacy of nutraceuticals, homeopathy, and traditional medicine in treating mastitis and a lack of standards for evaluation of these remedies. Studies are showing that nutraceuticals can be efficacious. Phytotherapeutics generally are complex chemical mixtures and can be multifaceted in mechanisms of action. Intramammary infusions of probiotics and bacteriocins are being shown to be efficacious, and their mechanisms of action include being an immune stimulant. Immunotherapy with antibodies and immune system components can be efficacious. Intermingled treatments with nutraceuticals and pharmaceuticals can be more efficacious than either treatment alone.
Posted by Cheryl & ethnovet at 05:11

Adapting Environmental Ethics to Rapid, Anthropogenic, and Global Ecological Change
H.J. Andrews Forest Research Station
Blue River, Oregon
JULY 10-13, 2019
Global biophysical systems have remined relatively stable across twelve thousand years of the Holocene Epoch, providing background climatic and ecological conditions for the emergence and development of human civilization as we know it. While there is convincing evidence of that the state and function of global earth systems, and thus subsequent environmental and biological conditions, have been significantly different across geologic time, alterations underway today stand out for their rapidity and anthropogenic origin. The so-called Anthropocene portends unprecedented and arguably irreversible ecological conditions arising within only a few hundred years, or less.
The theme of this conference is to recognize the need for received frameworks of environmental thinking and historic environmental imaginaries to be revisited, adapted, and perhaps radically revised – or not – in response to normative, political, and existential demands precipitated by radical anthropogenic environmental change across global, regional, and local scales.

Abstract
In this work we aim at presenting and interpreting the use and meaning of plants in traditional veterinary in Sierra de Ancasti (Catamarca, Argentina). By employing ethnobotanical research methods and techniques, we registered taxa of vernacular ailments and 62 medicinal uses corresponding to 43 species from 30 botanical families. They are used medicinally due to their healing, digestive, anti-parasitic and oxytocic properties. In addition, the role of toxic and dangerous species was analyzed in the local veterinary. Together with the repertoire of plants, we also described other popular therapeutic techniques and cultural practices of religious-ritualistic nature. Finally, tension was analyzed between tradition and modernity in this field of knowledge. It has been concluded that, despite ethnoveterinary knowledge is relevant for many species and uses, its practice is being gradually neglected, which could eventually lead to the extinction of experience. © 2017 Boletín Latinoamericano y del Caribe de Plantas Medicinales y Aromáticas.
Posted by Cheryl & ethnovet at 06:39

https://www.researchgate.net/publication/333224061_ANTIMICROBIAL_EFFECT_OF_Psidium_guajava_L_AGAINST_Salmonella_typhymurium_IN_Cavia_porcellus_L/references
Posted by Cheryl & ethnovet at 06:04

Ethno pharmacology is defined as a slipt up approach for novel drug overture by providing valuable data about medicinal plants in different cultures. Identification and documentation data of medicinal plants in veterinary treatments of north khorasan province in the past, take the aim of this ethno pharmacological study. North khorasan province with different climates and wide diversity in plant species located in the Northeastern of Iran. Ethno veterinary data was collected from rural areas of two city of north khorasan province, Bojnord and Shirval, over an 8-month period in 2017. The medical plants and traditional knowledge of ethno veterinary practices that used for livestock remedy gathered from 20 local informants and practitioners in animal husbandry from the past, by face to face interview and semi-structured questionnaires. In this present investigation, 19 plants founded to be used in treating illness and problems of sheep and cattle. In this research also the amount of number of use (NU), frequency of citation (FC) and Relative cultural importance (RCI) indecies determined.
https://www.researchgate.net/publication/333201053_ETHNO_VETERINARY_IN_TRADITIONAL_LIVESTOCK_OF_RURAL_AREAS_OF_NORTH_KHORASAN_PROVINCE_IN_IRAN
Posted by Cheryl & ethnovet at 05:24

Abstract
Ethnoveterinary medicine (EVM) considers implementation of folk knowledge and skills in animal health care, production and breeding. Also it means understanding of diagnostic, preventive, therapeutic skills and treatments in order to improve public health. EVM has a wide importance in the organic farming and environmental protection. Our studied geographic area is important because it is inhabited with Shops or Torlaks, a special ethnographic group of the South Slavs. Torlaks have developed special animal treatment and methods of animal breeding, particularly in sheep. The aim of this study was to examine the knowledge of ethno veterinary medicine in villagers from the eastern part of Stara planina in the Dimitrovgrad municipality, District of Pirot, to point out the specificity and importance of knowledge in relation to the geographic places and determine the applicability of knowledge in veterinary medicine and organic production. The research included 50 inhabitants from area of villages: Gornji Krivodol, Boljev Dol, Kamenica and Senokos. All villages are in the territory of the municipality of Dimitrovgrad, District of Pirot, Republic of Serbia. Performed methods were: non-structural, semi-structured and field interviews. According to the collected data, 64 different recipes and methods were noted, of which 43 include medicinal plants recipes, and other data include different methods of diagnosis, treatment, prevention and animal nutrition.
Posted by Cheryl & ethnovet at 05:34

USE OF MEDICINAL PLANTS IN CARE OF WOMEN WITH GYNECOLOGICAL DISEASES: INTEGRATIVE REVIEW

https://www.researchgate.net/profile/Juan_Carlos_Alcocer/publication/332464195_USE_OF_MEDICINAL_PLANTS_IN_CARE_OF_WOMEN_WITH_GYNECOLOGICAL_DISEASES_INTEGRATIVE_REVIEW/links/5cb6b8784585156cd79db295/USE-OF-MEDICINAL-PLANTS-IN-CARE-OF-WOMEN-WITH-GYNECOLOGICAL-DISEASES-INTEGRATIVE-REVIEW.pdf
Posted by Cheryl & ethnovet at 06:39

Abstract
Phytochemical processing is an area of engineering that is critical to the growing multi million dollar global business of healthcare in pharmaceutical, neutraceutical, and herbal based industries. The herbal related market includes herbs used as food or food additives, cosmetic ingredients, and herbal medicines. In developing countries they pose a large threat to public health and contribute to the prevalence of malnutrition, anaemia, eosinophilia and pneumonia. A main stream medicine is increasing receptive to use of antimicrobials and other drugs derived from plants as traditional antibiotics. The results of phytochemical screening of methanolic extracts of Alstonia scholaris, Lawsonia inermis, Ervatamia divaricata and Asparagus racemosus revealed the presence of terpenoids, steroids, flavonoids, carbohydrates and some other phyotochemicals.

https://www.researchgate.net/publication/333017605_A_COMPARATIVE_PHYTOCHEMICAL_ANALYSIS_OF_ALSTONIA_SCHOLARIS_LAWSONIA_INERMIS_ERVATAMIA_DIVARICATA_AND_ASPARAGUS_RACEMOSUS
Posted by Cheryl & ethnovet at 19:07