By Molly Jones-Lewis
The passage for today’s post comes from the Theriaca, a poem by  Nicander of Colophon about poisonous animals and how to avoid them, all described in lovingly vivid detail – a juxtaposition of the disgusting and the sublime. 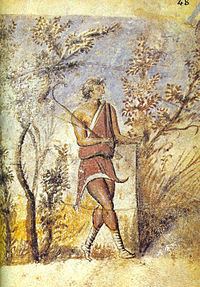 Nicander of Colophon depicted in a 10th century manuscript. Source: Wikipedia
If you find two snakes mating at the crossing of three roads and,
When they have just started mating, toss them alive into a pot with certain ingredients,
You will have a defense against dire disasters.
Throw in thirty drachmas’ worth of a newly-slain deer’s marrow,
Also one-third portion of rose oil, the kind that professionals grade
“first” or “middle” or “fine ground.”
Then, pour in the same amount of shining oil,
And a quarter portion of wax: heat these things in a round-bellied pot,
Cooking until the flesh is softened around the spines and falls to pieces;
Then, take up a shaped, well-made pestle, and grind up all the many ingredients
Mixed up with the snakes; but throw the spines far away,
Because there is a poison capable of doing harm lurking in them.
Then, rub it all over your legs, you go on a journey, or are in your bed,
or whenever, after threshing in a dry summer, you belt your tunic up
to separate out the deep pile of grain with a pitchfork.
[Nicander, Theriaka 99-115]
One cannot help but think that they might not have needed all that snake repellant if they were not wandering the roadways harassing innocent reptiles. The deeply disturbing mental images Nicander gives us were, to his original audience, enhanced by cultural subtext.  Not only was the entertainment value greater for it, but also the recipe’s credibility; this is a recipe that, to an ancient audience, makes sense. 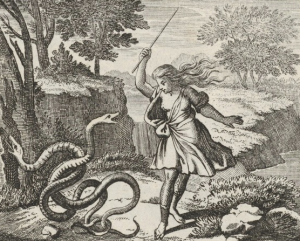 Tiresias, apparently not yet aware of having become a woman, beats up a pair of frisky snakes. Woodcut illustration, 1690 CE. Source: https://commons.wikimedia.org/wiki/File:Tiresias_striking_the_snakes.png
The image of mating snakes harkens to one of the most memorable incidents in Greek mythology: the Theban seer Tiresias and his temporary sex change. One day, the story goes, Tiresias was walking down the road and came upon a pair of snakes mating. He hit them with his stick, and was punished by Hera by being turned into a woman. After some years, Tiresias came again upon another pair of mating snakes, but left them alone. He was then returned to his male body. This experience ended up winning him the dubious honor of settling a dispute between Hera and Zeus over whether women or men enjoy sex more.  The verdict? Women do, ten times more than men.
Nicander’s audience would have known this story very well, as Tiresias’s sexual adventures were a favorite topic in the literature of the day. It also creates an in-joke within the recipe, because molesting a pair of mating snakes carried a very memorable mythological punishment. Is the poet setting up his audience for poor decision making and the sort of divine retribution that would make the average ancient Greek man cringe? Or are we to understand the recipe maker as a stand-in for Tiresias, a mythological figure with quasi-divine knowledge and wisdom? Or is the point simpler: this powerful deterrent comes at great risk and requires heroic efforts? 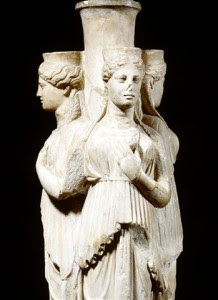 Hecate, AKA ‘Trivia,’ who was often worshipped at three-way crossroads
Let us turn now to the three-way crossroad (triodos) in which the mating snakes must be found. Such crossings were places of power in ancient magic lore, so much so that the Romans referred to the goddess Hecate as “Trivia” or “Three roads.”
The fact that a pair of snakes is snatched from a place rich in supernatural power to be killed in the act of making new life is deeply meaningful. Indeed, much of how this recipe ‘works’ stems from its symbolism.First, this pair of snakes represent all venomous snakes: the concept of ‘all the snakes’ is embodied in a breeding pair, by the same logic that had Noah leading animals two by two into the ark. Then, the human asserts the power to kill over the snakes while they are in the act of making new life. This is done in a place of symbolic metaphysical power created by humans for human travel, further emphasizing the actor’s assertion of power over a dangerous force of nature. As the recipe continues, the human imposes cooking technology on the snakes, then physically dismembers and crushes them into a wearable paste, minus those too-poisonous vertebrae.
The act of a recipe can be as, if not more, therapeutic than the end product. Making Nicander’s recipe allows the actor to soothe his fear of snakes with symbolic and literal violence, but it also treats the audience’s anxiety by convincing them that snakes are a preventable disaster. That said, one cannot help but notice that the poem gleefully creates the very ophidophobia this passage ‘treats.’
Look for part two, in which the recipe’s place in the genres of pastoral poetry, infotainment, and horror takes the stage.

Molly Ayn Jones-Lewis a Lecturer in the Department of Ancient Studies at the University of Maryland, Baltimore County. Her research is focused on the social history of medicine and medical lore in the ancient Mediterranean. Her most recent work has covered poison-lore, ethnicity, and eunuchs, and she is preparing a book on doctors in Roman law and society. When she is not living vicariously in the past, she can be found knitting on the couch under the supervision of my feline overlords.
Posted by Cheryl & ethnovet at 14:10