By Molly Jones-Lewis
Today we return to Nicander’s snake repellant recipe, this time with a new focus: the dramatic setting where calm countryside hides a range of dangers, and the protagonist whose life is so full of bloodthirsty snakes that he resorts to covering himself in rose-scented snake goop. 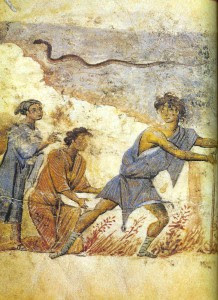 Additionally, the rose oil of antiquity was made with a quantity of salt, which would have acted as a preservative. Source: Wikipedia
There is something very odd about the world Nicander is showing us: the poetry’s style, vocabulary, and allusions to mythology are the product of elite, urban culture under Pergamene court sponsorship (see here for more on King Attalus, who was Nicander’s patron). And yet, the poet seems to be writing advice for an audience that goes on frequent walks through snake-infested paths, sleeps in snake-infested places, and threshes their own wheat frequently enough to need large batches of snake repellant. Granted, it is plausible that ancient elites could have been concerned about snake encounters while travelling, or when spending nights at rustic estates. However, the sort of person who would be looking up snake lore in Nicander’s poetry would not be doing so on his threshing break!
This is where genre comes into play: Nicander is writing a kind of poetry in which rustic protagonists in rural settings are expected. In antiquity, didactic poems concerning nature were usually written as if meant to help outdoorsy farmers, no matter how urbane the actual author and audience. But Nicander’s world comes with a key difference – a clever subversion of pastoral fantasy: Nicander’s narrator is leading us not through an orderly rustic landscape, but through a snake-infested scorpion-encrusted tour of horrors. 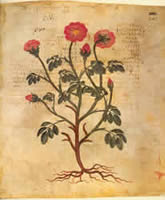 A rose as illustrated in the Anicia Dioscorides, a 6th century copy of an ancient pharmacy manual.
This is where the non-snake ingredients of the recipe — the deer, wax, and rose oil — come into play. First, the roses. Theophrastus, a philosopher and botanist predating Nicander, mentions that rose oil is so useful for covering up other smells that perfume merchants on the point of losing a sale would overpower their customers’ ability to smell properly by wafting rose oil at them.[1] One can imagine that the end product of a snake-and-deer soup could benefit from the odor masking properties of rose oil! Additionally, the rose oil of antiquity was made with a quantity of salt, which would have acted as a preservative. [2] The presence of salt also accounts for the puzzling “Finely ground” grade mentioned in the recipe.
Deer marrow is also an apt addition. While not a rare species, deer are a rural creature available primarily to country folk and those in cities wealthy enough to buy game meat. Even then, getting fresh deer marrow (as Nicander specifies) would give an urban druggist difficulty.[3] Deer antler was regularly used in smoke-screens against snakes, and Dioscorides, an author of the first century CE, maintains that the marrow also can drive off wild beasts. So here too an ingredient that is in keeping with the pharmacy of the ancient world also adds a thematic touch of rustic flavor to the poem’s setting.
Nicander’s wax is almost an afterthought, a common ingredient likely added for consistency’s sake. Beeswax, then as now, could make a runny mixture (like snake-deer-rose stew) into a more workable topical lotion.
So what should we make of Nicander’s recipe?  This sort of poetry was the ‘infotainment’ of its day. He entertains and educates by making connections to stories and images that are familiar to his audience, much the same way that Neil DeGrasse Tyson uses stories, myths, and animation technology in his Cosmos series. Although not himself a scholar of toxicology, Nicander worked from texts written by the experts of his time, and natural philosophers of subsequent generations treated the Theriaca as a reliable source.[4]
As for the recipe itself, there is no way to know whether anyone actually wandered the ancient Mediterranean countryside looking for mating snakes to toss into their next batch of snake repellant, but Nicander gives clear directions that include the elements one expects from less literary recipes. There are probably traces of actual folk practice inspiring the passage, but it’s nearly impossible to say which elements those are.
Nor should one try to divorce the elements of Nicander’s recipe from each other; on the contrary, there is therapeutic value in reading a finely crafted recipe, even if you never whip up your own batch. Everything about this passage is tailor-made to grasp an elite audience’s attention, first by creating a sense of urgent horror as a familiar setting devolves into a poisonous nightmare, then provide comfort in the form of human knowledge and power.
The recipe itself is therapy via fantasy for human beings who have had it with all these snakes on their plains.
[1] Theophrastus De Odoribus 10
[2] Theophrastus De Odoribus 8.
[3] See Dalby Food in the Ancient World, p. 114.
[4] Scarborough discusses the full range of sources in “Nicander’s Toxicology”
Posted by Cheryl & ethnovet at 07:15