Your dog remembers more than you think

At last, scientists may have an answer to a question every dog owner asks: Does your pet remember the things you do together? For people, at least, the ability to consciously recall personal experiences and events is thought to be linked to self-awareness. It shapes how we think about the past—and how we predict the future. Now, a new study suggests that dogs also have this type of memory, indicating that the talent may be more common in other animals than previously recognized.
The study, “is a creative approach to trying to capture what’s on a dog’s mind,” says Alexandra Horowitz, a dog cognition scientist at Barnard College in New York City who was not involved in the research.
The idea that nonhuman animals can consciously remember things they’ve done or witnessed in the past, called episodic memory, is controversial—largely because it’s thought that these animals aren’t self-aware. But scientists have shown that species like Western scrub jays, hummingbirds, rats, and the great apes—those that have to recall complex sequences of information in order to survive—have “episodiclike” memory. For instance, the jays remember what food they’ve hidden, where they stashed it, when they did so, and who was watching while they did it.
But what about recalling things that aren’t strictly necessary for survival, or someone else’s actions? To find out whether dogs can remember such details, scientists asked 17 owners to teach their pets a trick called “do as I do.” The dogs learned, for instance, that after watching their owner jump in the air, they should do the same when commanded to “do it!”
“But that alone doesn’t prove episodiclike memory,” says Claudia Fugazza, an ethologist at Eötvös Loránd University in Budapest, and the study’s lead author. “You have to test them when they don’t expect it.”
So in the next round of training, the owners taught their dogs to lie down after watching them do something like touching an open umbrella or stepping up on a chair. They were no longer required to imitate. “And then we surprised them,” Fugazza says. Again, an owner performed an action, but this time after the dog laid down, the owner ordered, “Do it!” The dog then had to recall what it had seen its owner do, even though it had no expectation that it needed to remember the action. The dogs were tested in this way both 1 minute and 1 hour after watching their owners.
The dogs succeeded in 33 of 35 trials. That suggests that dogs have something similar to episodic memory, Fugazza and her team report today in Current Biology. But the longer the canines wait, the more trouble they have recalling the action. That’s similar to human episodic memory, which decays at a faster rate when an event isn’t intentionally recorded, the researchers say. For instance, you’re more likely to remember your first kiss than a hug last week from your spouse.
“It shows that our dogs remember events much like we do, and [it] blows out of the water the old way that most scientists would characterize animal memory,” says Brian Hare, a dog cognition expert at Duke University in Durham, North Carolina, who was not involved in the study. “Our dogs’ memories aren’t based simply on repetition and reward.”
Discovering that this type of memory is not unique to humans means it “did not evolve only in primates, but is a more widespread skill in the animal kingdom,” Fugazza says. Indeed, parrots, dolphins, and killer whales could be the next ones to be tested, because other researchers have already taught these species to “do as I do.” Most likely, they remember more than we think. 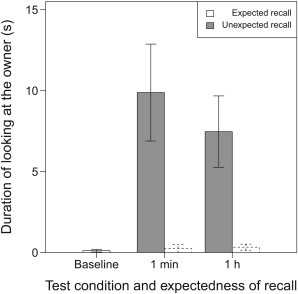 Duration of Looking at Owner
Duration of looking at the owner in Do as I Do tests of dogs after expected (white bars) or unexpected (gray bars) “Do it!” commands were given. Bars with continuous lines represent data from the present study; bars with dashed lines represent data from two previous studies with similar conditions but expected recall (1 min retention time with “Lie down” distraction before imitation[14]; 1 hr retention time[15]).
See also “Violation of expectation: dogs look longer at the owner if the test is unexpected” in Supplemental Experimental Procedures. 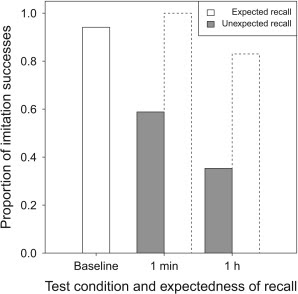 The existence of episodic memory in non-human animals is a debated topic that has been investigated using different methodologies that reflect diverse theoretical approaches to its definition. A fundamental feature of episodic memory is recalling after incidental encoding, which can be assessed if the recall test is unexpected [1]. We used a modified version of the “Do as I Do” method [2], relying on dogs’ ability to imitate human actions, to test whether dogs can rely on episodic memory when recalling others’ actions from the past. Dogs were first trained to imitate human actions on command. Next, they were trained to perform a simple training exercise (lying down), irrespective of the previously demonstrated action. This way, we substituted their expectation to be required to imitate with the expectation to be required to lie down. We then tested whether dogs recalled the demonstrated actions by unexpectedly giving them the command to imitate, instead of lying down. Dogs were tested with a short (1 min) and a long (1 hr) retention interval. They were able to recall the demonstrated actions after both intervals; however, their performance declined more with time compared to conditions in which imitation was expected. These findings show that dogs recall past events as complex as human actions even if they do not expect the memory test, providing evidence for episodic-like memory. Dogs offer an ideal model to study episodic memory in non-human species, and this methodological approach allows investigating memory of complex, context-rich events.

The study was conceived by C.F., A.P., and A.M. The experiments were run by C.F.; A.P. analyzed the data. The article was drafted by C.F. and revised by A.P and A.M. All authors gave final approval for publication and agree to be held accountable for this work.

Document S1. Supplemental Experimental Procedures and Table S1
Movie S1. Related to Experimental Procedures
The video shows an unexpected imitation test after 1 min retention interval. A dog that was first trained with the Do as I Do method and then to lie down instead of imitate is unexpectedly commanded to imitate in the test.
Received: June 24, 2016; Received in revised form: September 19, 2016; Accepted: September 28, 2016; Published: November 23, 2015
© 2016 Elsevier Ltd.
Posted by Cheryl & ethnovet at 15:22