Recipes Project - Recipes and the “Weird”: A Halloween Rumination

We might recall Shakespeare’s “Weird Sisters,” the seemingly-sinister witches from Macbeth. Their “Double, double toil and trouble” resonates in our memories as it does in their incantation before Macbeth: “Double, double toil and trouble: / Fire, burn; and, cauldron, bubble” (4.1.20-21). As All Hallow’s Eve approaches, it seems to me useful to revisit their charms; or, as it were, how we might use our sense of Macbeth’s witches to rethink some of the more unsavory of ingredients in early modern recipes, and how we might use these recipes to rethink our assumptions about the witches.
The Weird Sisters’ “hell-broth” includes such mammalian and amphibious creature parts as “eye of newt,” “Gall of goat,” “Adder’s fork,” “Wool of bat,” and “tongue of dog.” Macbeth is appalled at the concoction they brew, and, as it seems, so are audiences (especially modern); the witches, so often portrayed today as elusive, macabre, dangerous, even grotesque, have been written into our modern imagination as integral to the darkness engulfing Dunsinane. But what if their witchy-work is not-so-sinister after all? What if they simply get a bad rap? After all, it is Macbeth who does the killing in the play; they merely prognosticate his actions.
I turn to the manuscript recipe book of Rebeckah Winche, a contemporary source, though not of the kind we typically turn to when we ask about early modern witchcraft. For that, we more often go to Reginald Scot’s Discoverie of Witchcraft (1584) or the like. However, such animal ingredients were not uncommon in early modern recipes; and in those books, they certainly do not denote the dark arts. In Winche’s book, we find a series of recipes for “The King’s Evil,” Scrofula (or, tuberculosis), one that helps to identify the disease, and two to cure it: 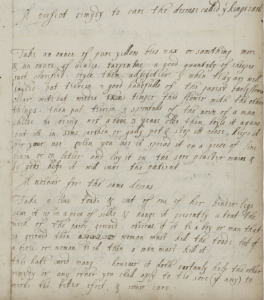 A redy way to know the deseas called the Kings
evill
Take a grownd worme & lay itt alive to the place greved &
take a green docke leafe or 2 andlay them upon the worme
& bine them to the place at night when the patient goes to
bed & if it be the kings evill itt will turne to dust or poud
=er by the morning otherwise it will remayn dead in his owne
former forme as it was a live
A perfect remydy to cure the desease called the kings evill
Take an ounce of pure yellow bees wax or something more
& an ounce uenice turpentine a good quantity of sheepes
suet clarified. boyle them alltogether & when thay are well
boyled put therein 2 good handfulls of the purest barly flower
clear without weedes then temper this flower with the other
things. then put therein 3 spoonfulls of the urin of a man
childe he being not above 3 years olde then boyle it agane
put itt in some earthen or gally pot & stop itt close, keepe it
for your use: when you use it spread it on a peece of fine
linin or on lether and lay it on the sore plaster waise &
by gods helpe it will cure the patient
A nother for the same deseas
Take a live toade & cut of one of her hinder legs
sewe it up in a pece of silke & hange it presently about the
neck of the party greeved. observe if it be a boy or man that
is greeved then a girl or woman must kill the toade but if
a girle or woman be ill then a man must kill it
this hath cured many however if doth sertanly help the other
remydy or any other you shall apply to the sore (if any) to
worke the better efect & sooner cure.
To diagnose “The King’s Evil,” one is instructed to lay a live worm to the aggrieved area, to fix to the unfortunate worm to  “green docke leafe” and wait to see whether the worm desiccates or remains plump (but still deceased) to determine whether the patient is indeed infected. And to cure “The King’s Evil,” should the patient (and the worm) be so unfortunate, the practitioner summons not the powers of the otherworld but the urine of a man-child, or the pieces of a toad, who is taken alive and dismembered, removing one of her “hinder legs,” which is then sewn into a silk parcel and hung from the patient’s neck. If a male patient, a woman kills the toad; if a female patient, then a man.
Certainly, this diagnosis and cure might strike some as hocus-pocus, drawing on superstition more than sound medical training and having no more validity than, say, snake oil or verging on something much darker. However, early modern medicine is flush with examples of such diagnoses and cures, and its practitioners appeared quite ready to employ them.
While early modern men and women used these cures (as healers and patients), this sort of household medicine was also (and increasingly) understood as inferior relative the professional medicine of scientists and doctors, as practice not to be trusted—or, as we see so often in depiction of witches, as that which ought make us suspicious of its source and its agents. So what is it about domestic medicine (and cookery) that has lent itself to this sort of denigration, or the fear associated with witchcraft that enables its marginalization? After all, early modern domestic medicine is not unlike modern herbal medicine, both of which have been relegated to inferior practice, nudged out by codified and “professional” modes of healing that tend to privilege machinery over touching, pharmaceuticals over tinctures and teas.
By juxtaposing Macbeth’s “Weird Sisters” with the recipes from the Winche book, both of which contain what are often associated with “witchy” ingredients, we might focus not so much about the contents of the concoctions but rather the way both highlight ways of knowing that are not easily quantified, not the ostensible “objective” knowledge of (early modern) science but rather something more murky. But that does not mean they are at best silly frivolities and at worst sinister machinations. For Macbeth’s witches are guilty of nothing more than “knowing” (or foreknowing, since they merely predict his actions); they no more dictate Macbeth’s murderous ambitions than he can direct their appearances and disappearances. Early modern recipe practitioners who administer the earthy worm, who collect and pour the spoons full of man-child urine and dismember the toad and make a modern reader say, “Ew,” arguably did no less to diagnose and cure tuberculosis than the scientists of the day. And as these amateur practitioners worked their medicine, they were necessarily called upon to observe their patients (and their ingredients) in ways that professional doctors and scientists were beginning to move away from: their tactile contact with worm, toad, urine, human skin, and the intensive observation within natural surroundings (rather than a lab) meant that they had to look, listen, and touch differently. Rather than in the laboratory, such amateur practitioners adapted their cures on site, modified their medicine according to individual need (see the many recipes “for another”) rather than generic conditions. And so, I wonder if on this All Hallow’s season we might take the opportunity to revisit what seems “weird” about the sisters, and how the ingredients and practices of so many early modern men and women, might help us revisit the seemingly strange aspects of medicine in the period and its relation to its ostensible opposite, science. For in these recipes, the strange, the “weird,” may indeed be the very thing that we have made alien—the intimate connections between person and patient, between animal or plant and human, between self and Other–rather than what has in fact been alien all along.
Posted by Cheryl & ethnovet at 17:54