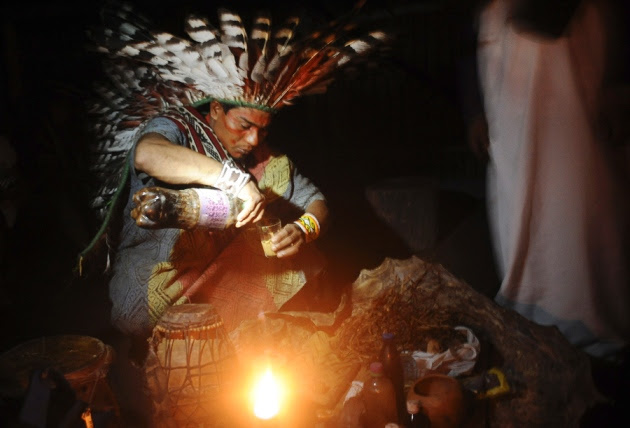 Lunae Parracho/Reuters/Corbis
Ayahuasca being prepared for a healing ritual in the Brazilian village of Novo Segredo.
A psychedelic drink used for centuries in healing ceremonies is now attracting the attention of biomedical scientists as a possible treatment for depression. Researchers from Brazil last month published results from the first clinical test of a potential therapeutic benefit for ayahuasca, a South American plant-based brew1. Although the study included just six volunteers and no placebo group, the scientists say that the drink began to reduce depression in patients within hours, and the effect was still present after three weeks. They are now conducting larger studies that they hope will shore up their findings.
The work forms part of a renaissance in studying the potential therapeutic benefits of psychedelic or recreational drugs — research that was largely banned or restricted worldwide half a century ago. Ketamine, which is used medically as an anaesthetic, has shown promise as a fast-acting antidepressant; psilocybin, a hallucinogen found in ‘magic mushrooms’, can help to alleviate anxiety in patients with advanced-stage cancer2; MDMA (ecstasy) can alleviate post-traumatic stress disorder; and patients who experience debilitating cluster headaches have reported that LSD eases their symptoms.
Ayahuasca, a sacramental drink traditionally brewed from the bark of a jungle vine (Banisteriopsis caapi) and the leaves of a shrub (Psychotria viridis), contains ingredients that are illegal in most countries. But a booming ayahuasca industry has developed in South America, where its religious use is allowed, and where thousands of people each year head to rainforest retreats to sample its intense psychedelic insights.

More related stories
The brew has been studied by anthropologists, social scientists and theologians, but clinical research on ayahuasca has been limited to observation of its effects in mice and rats, and in healthy human volunteers3, including brain-imaging studies4 and retrospective surveys of past use5.
For the latest study, researchers led by Jaime Hallak, a neuroscientist at the University of São Paulo, Brazil, gave one mild dose of ayahuasca to six volunteers who had been diagnosed with mild to severe depression that was unresponsive to at least one conventional antidepressant drug. None had drunk ayahuasca before. 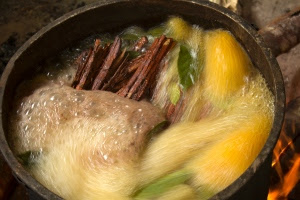 Jairo Galvis Henao/Creative Commons
Ayahuasca is a 'tea' made from Amazonian plants.
After their drink, the participants sat in a quiet, dimly lit room. Physicians used standard clinical questionnaires to track their depression symptoms. Improvements were seen in two or three hours (though the psychedelic effects of an oral dose take around five hours to wear off) — a rapid effect, as conventional antidepressants can take weeks to work. The benefits, which were statistically significant, continued to hold up in assessments over the next three weeks. Three of the participants vomited, a common side effect of ayahuasca, but otherwise the procedure was well tolerated, Hallak says.
“It is a proof of concept of what so many ritual ayahuasca users already know: ayahuasca can help one feel extra well, not just during the experience, but for up to days or weeks after,” says Brian Anderson, a psychiatrist at the University of California, San Francisco, who was not involved in the study but has published papers on the drink’s potential6. “The relationship between ayahuasca’s psychedelic effects and its therapeutic effects needs to be empirically studied,” he says.
James Stone, a psychiatrist at King’s College London who has studied the effects of psychoactive drugs on the brain, says that the study is interesting but should be viewed with caution because it had no placebo group. “Placebo response is a well-documented effect in clinical trials of antidepressants,” he says. “The only things that can really be concluded from this study are that it is tolerated by patients with depression, and in these people did not seem to have any serious side effects following a single dose.”
It is biochemically plausible that ayahuasca could treat depression — its plants contain compounds that alter the concentrations of the mood-regulating neurotransmitter serotonin in the brain — as do commercial antidepressants. These compounds include the hallucinogen N,N-dimethyltryptamine, which binds to serotonin receptors, and also the chemicals harmine, tetrahydroharmine and harmaline, which are thought to inhibit an enzyme called monoamine oxidase A and so prevent the breakdown of serotonin and other neurotransmitters.
“It is possible that ayahuasca and other serotonergic psychedelic drugs, such as psilocybin, may be useful as antidepressants for particular subsets of patients in the future,” says Stone. “We await the results of well-designed, random controlled trials to determine clinical effectiveness.”
Further trials are under way. Draulio de Araujo, a neuroscientist at the Federal University of Rio Grande do Norte in Natal, Brazil, and a co-author of the study, says that his team has already treated 46 (out of a planned 80) patients in a randomized, double-blind, placebo-controlled study of ayahuasca and depression that began in January 2014. “We hope to finish it by the end of this year,” he says.