Successful Spontaneous Conception and Live Birth in a Woman With an Extremely Low Level of Anti-Müllerian Hormone Who Received Korean Herbal Medicine (Bogungsamul-tang): A Case Report

Conventional treatments do not appreciably improve fecundity in women with extremely low-serum levels of anti-Müllerian hormone (AMH). In Korea, herbal medicine is widely used to treat female infertility. We report a case in which an infertile woman with a very low AMH level naturally conceived after two months of herbal treatment (Bogungsamul-tang), ultimately giving birth to a full-term baby. Although AMH levels were not measured immediately before and after treatment, our study suggests that Korean herbal remedies are a viable option for infertile women with negligible AMH levels. Further studies should be performed to fully assess the clinical effects of Bogungsamul-tang in such women.

The serum levels of anti-Müllerian hormone (AMH) are frequently measured at doctors׳ offices as an ideal marker for assessing the remaining oocyte pool.1 Although somewhat controversial, AMH levels appear to predict a women׳ chance of becoming pregnant and giving birth to a healthy baby.2 ;  3 Owing to low clinical pregnancy rates (4.4–7.9%) in women with extremely low AMH levels (<0.2–0.4 ng/ml),4; 5 ;  6 clinicians usually recommend that these patients should be refused treatment or proceeded to use egg donation.
Recent studies suggest that herbal medicine can improve pregnancy rates in infertile women.7 ;  8 In Korea, herbal remedies have been widely used to treat female infertility since ancient times. However, there are insufficient data on the effects of herbal remedies on infertility in women with extremely low AMH levels.
Herein, we report a successful pregnancy and delivery in a woman with a very low AMH level (<0.14 ng/mL) who received a Korean herbal treatment.

A 34-year-old woman with primary infertility came to our clinic on November 28, 2014 after 3 years of failing to conceive. She had married in November 2010 and used contraceptives during the first year of her marriage. We obtained informed consent from the patient.
In March 2014, before visiting our clinic, her hormone levels were measured on day 3 of her menstrual cycle at a hospital specializing in infertility. Her hormone profile was as follows: AMH, <0.14 ng/mL; follicle-stimulating hormone (FSH), 26.5 mIU/mL; luteinizing hormone, 8.27 mIU/mL; estradiol, 38.2 pg/mL; prolactin, 11.96 ng/mL; testosterone, 0.28 ng/mL; thyroid-stimulating hormone, 2.70 μIU/mL; and dehydroepiandrosterone sulfate, 232.0 μg/dL. As noted by her gynecologist, these results indicated a diminished ovarian reserve and a high risk of premature ovarian failure. She was advised to undergo in vitro fertilization (IVF) as soon as possible, because it would be difficult for her to conceive spontaneously. Her partner׳s hormone profile was also determined to ensure that his sperm morphology was normal.
After visiting the hospital in March 2014, the patient drank heavily and considered foregoing her plan to have a child. During this period, her menstrual cycles became irregular, and she had irregular uterine bleeding two weeks after each bout of heavy drinking. In November 2014, with a renewed purpose of mind, she entered our clinic for herbal treatment in preparation for IVF. We suggested her to undergo IVF after receiving a Korean herbal treatment for three months.
The patient received a decoction of herbal medicines, termed Bogungsamul-tang (BST) on November 28, 2014 and January 10, 2015 for four-week period. The daily dose of BST consisted of Rehmanniae Radix Preparata (10 g), Angelicae Gigantis Radix (8 g), Cnidii Rhizoma (8 g), Paeoniae Radix Alba (8 g), Cuscutae Semen (16 g), Ramulus Taxilli (16 g), Ligustri Fructus (16 g), Eucommiae Cortex (12 g), Cistanches Herba (12 g), Dipsaci Radix (8 g), Fossilia Ossis Mastodi (4 g), and Ostreae Concha (4 g). A single day׳s dose of BST was boiled in 500 mL of distilled water for approximately two hours, until the volume was reduced to 100–120 mL. The BST decoction was administered three times per day 30 min after meals. The patient did not receive any conventional treatment while undergoing herbal treatment, and no adverse effects were observed during or following herbal treatment.
To assess the effects of BST on the menstrual cycle and infertility, we recommended her to measure basal body temperature (BBT) orally every morning at a given time, immediately after waking and before any activity. The results of these measurements showed that her menstrual cycles were no longer irregular and accompanied by ovulation (Figure 1). Accordingly, attempting natural pregnancy was recommended. 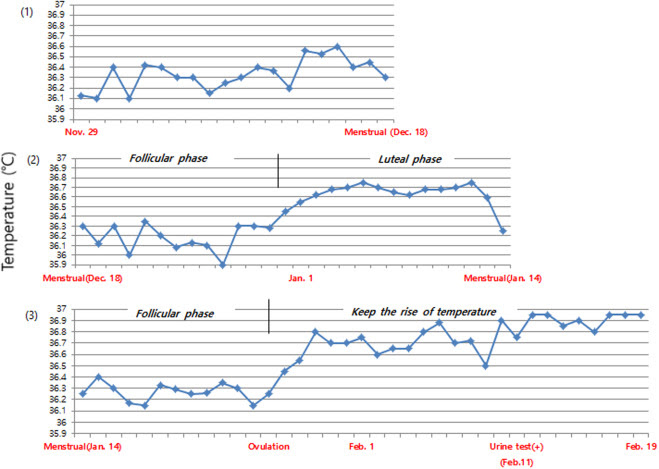 After two months of herbal treatment, the patient reported a positive result in a urine pregnancy test using a preg card. Ultrasound showed a viable clinical pregnancy with a fetal heartbeat on February 25, 2015 (Figure 2), and the patient gave birth to a healthy, full-term baby on October 11, 2015. Figure 3 shows the timeline of events in our case.

We report a case in which a woman with an extremely low AMH level (<0.14 ng/mL) and a three-year history of primary infertility became pregnant after receiving a traditional herbal treatment. The patient conceived spontaneously, ultimately giving birth to a healthy, full-term baby.
AMH is secreted by the granulosa cells of growing follicles and appears to reflect the ovarian reserve9; therefore, it is thought to predict natural fecundity. Previous studies suggest that extremely low AMH levels (≤0.2 ng/mL) increase the risk of IVF cycle cancellation and reduce the likelihood of a live birth after assisted reproduction.2 ;  10
Women with extremely low AMH levels usually receive counseling regarding considerably declined pregnancy chances and are often advised to consider egg donations.11 However, several reports suggest that natural pregnancy is still possible in such women,4 ;  6 and herbal treatment may be a useful therapeutic option for achieving this goal.
According to the theory of traditional oriental medicine, the key of female infertility treatment is replenishing the blood and kidneys (Shen), which can invigorate the reproductive and endocrine systems.12 ;  13 Several recent systematic reviews suggest that herbal medicines can improve pregnancy chances in infertile women.8 ;  14 Moreover, another study found that herbal treatments increased AMH levels in women with diminished ovarian reserve15 and decreased FSH levels in women with premature ovarian failure.16
The herbal remedy applied to the patient in our report is termed BST, which is a Siwu decoction (Samul-tang) combined with other drugs for infertility treatment in traditional Korean medicine. The Siwu decoction is the most popular gynecological formula, and is known to effectively nourish the blood and combat blood stagnation.17; 18 ;  19Cuscutae Semen, Dipsaci Radix, and Ligustri Fructus are herbs which are used to activate the renal blood circulation and for ovarian stimulation. 20 And Eucommiae Cortex, 21Cistanchis Herba, 22 and Ramulus taxilli 23 are traditionally used to reinforce the function of kidney (Shen). Fossilia Ossis Mastodi and Ostreae Concha were used for anxiolytic and sedative activities 24 ;  25 (the patient had complained of anxiety). This mixture is thought to improve local blood circulation, ovarian function, and the receptivity of the endometrium to the fetus by replenishing the blood and kidneys. Although no adverse effects were observed in this case, further studies of possible teratogenic effects of BST are needed.
Our study had two limitations. First, only one case was described. Thus, more cases are needed to fully assess the effects of BST in infertile women. Second, post-treatment AMH measurements were not performed owing to the refusal of the patient to undergo further testing; we respected her decision. Despite these limitations, this study is noteworthy because it is the first report of successful treatment of an infertile woman with an extremely low AMH level via herbal medicine alone. Our results suggest that BST increases AMH levels, ultimately overcoming infertility. Large-scale randomized controlled trials are required to rigorously evaluate the clinical benefits of BST in infertile women.

© 2017 Elsevier Inc. All rights reserved.
Note to users:
Corrected proofs are Articles in Press that contain the authors' corrections. Final citation details, e.g., volume and/or issue number, publication year and page numbers, still need to be added and the text might change before final publication.
Posted by Cheryl & ethnovet at 13:47