When we get sick, it is fairly common to look to others’ experiences to make sense of what ailment we have, where we got it, and when we might recover. The interesting thing about the 1600s is that women made these sorts of comparisons more frequently than men. There are several explanations for this pattern, which I explore in my book, Ill Composed: Sickness, Gender, and Belief in Early Modern England (Yale University Press, 2015). The explanation I want to discuss here involves recipes (of course!). And that’s because recipes taught users to compare themselves to other people. 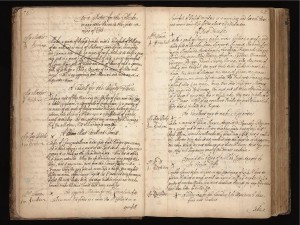 Image credit: Wellcome Library, London, Lady Ann Fanshawe, Recipe Book, MS 7113.
Some inserted the name of the person who provided or recommended a recipe. Ann Fanshawe’s book lists names next to recipes for treating all kinds of conditions, such as bloody flux and the bite of a mad dog. On this page of Fanshawe’s book, for instance, Lady Beadles, Kenelm Digby, and “My Mother” are written in the margins. (On the authorship of these inscriptions, see this post.)
We also see Fanshawe’s own name, which suggests that she tested her recipes to see whether they were worthwhile. As Elaine Leong has discussed in another post, Fanshawe crossed out the recipes that didn’t work. 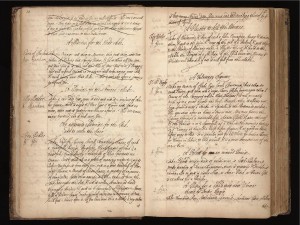 Image credit: Wellcome Library, London, Lady Ann Fanshawe, Recipe Book, MS 7113.
Some women noted others’ experiences alongside recipes in even more explicit ways. Writing in 1674 in a book now held at the Folger Shakespeare Library (MS V.a. 215), Susannah Packe included the following note below a cure for convulsions: “Approved by Ma:Sa: for all her Children was very successful.” Assigning authorship or naming someone who benefited from a recipe proved its worth, and also provided a way for readers to evaluate their own conditions. Packe and Fanshawe compared their own experiences to those of the men and women listed in the margins of their books.
When Elizabeth Hastings learned that her sister-in-law was sick in 1731, she penned a letter almost entirely devoted to the healing properties of snail water. This letter is now housed at the Huntington Library in California (HA 4741). She included a receipt for preparing the water, which is now lost, but may have involved distilling a pasty mixture of crushed snails, milk, mint, nutmeg, and dates. She also included directions for using the water (one spoonful taken with two to three spoonfuls of spa water) and even sent a bottle in the post so that her sister-in-law could “make a tryale of it.” She also listed people she knew who found the snail water useful. “Lady Ramsden from whom I had it has known surprizing Cases in Wastings of the Flesh,” she wrote. Also, “my Sister Ann’s servant Mrs. Dove is one instance who I believe would not have been now alive but for it.” This communal production, circulation, and validation of medical knowledge taught women to assess their bodies by looking to the words and experiences of others.
Why did women look to others to evaluate their ailing bodies more frequently than men? Recipes were not an all-female genre of writing, after all. Men wrote and collected them too. Recipes, however, are one of the only forms of medical writing in the period that substantial numbers of women authored. While men documented medical matters in all kinds of genres of writing, such as casebooks and treatises, recipes were the prime mode by which literate early modern women recorded and shared medical information. Perhaps, then, recipes helped teach women in early modern England to look to others’ bodies as a way of better assessing their own.
For more about gender, illness, and healthcare in early modern England, check out Olivia’s book: Ill Composed: Sickness, Gender, and Belief in Early Modern England.