1900: The Goats That Goaded the Fox Hill Golfers on Staten Island 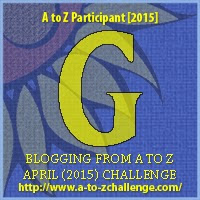 Staten Island once was home to more than a dozen golf courses. The first was Harbor Hill, which opened in 1878 and was bounded by Brighton, Lafayette, and Prospect Avenue in New Brighton. Another popular course was the semi-private Fox Hills Golf Course in Clifton, which opened in 1900 and was Staten Island’s first 18-hole course. 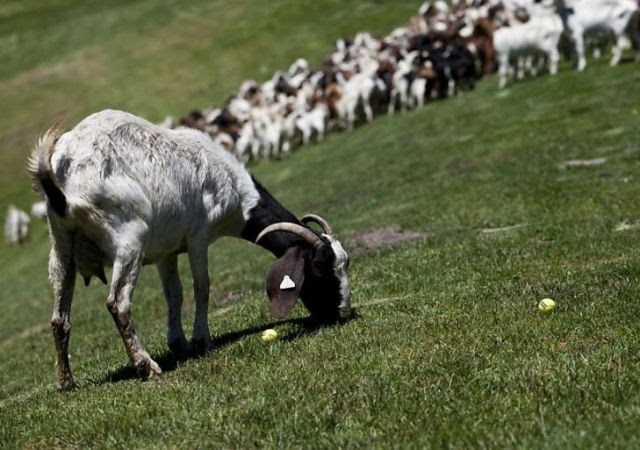 The Fox Hills Golf Course members told police that the goats “turn out on the links like a regiment of soldiers and frighten the women players.” In some cases, they said, the goats would chase the balls and run away with them. (In 1902 some cows invaded the course, but that’s another story for another time.)
Staten Island – the Borough of Richmond – was also once home to hundreds of goats. New York State Governor Al Smith (1923-28) said the first time he visited the island, there were four goats to every human.

The Fox Hills Golf Course had a clubhouse near Vanderbilt Avenue, which was then considered the largest golf clubhouse in the country. The clubhouse stood about where Osgood and Fairway avenues meet today; the site is now occupied by residential duplexes. New York Public Library Collections
In 1900, members of the new Fox Hills Golf Club overlooking the Narrows began complaining to authorities about the goats that were running at large and interfering with their game. They claimed that the goats came from “Goatville,” a settlement near Rosebank inhabited primarily by Italian immigrants who held tightly to the old country customs and religion.
The Health Department in the Borough of Richmond went to war against the goats and their owners. The police also got involved, including Sergeant Shay of the Stapleton Police, who issued summonses to a number of goat owners for violating the sanitary code by keeping goats without a license. 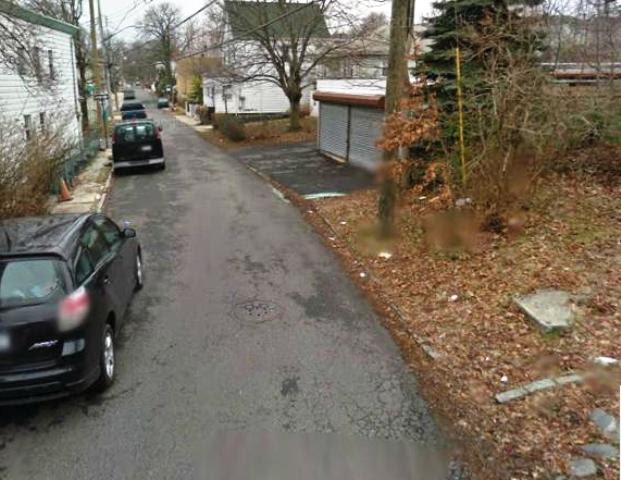 Bell Street in Rosebank is so narrow it can barely accommodate one car lane. In the 1800s and early 1900s, this road was a farm trail in a settlement called “nanny goat hills.” Here, Italian immigrants grew vegetables, raised goats, and planted fig trees (which is why today you can still find fig trees in backyards from Rosebank to Tottenville.)
A Brief History of Fox Hills
In the 19th century, the area we now call Clifton and Concord was only a small rural hamlet with fishing ponds and wooded trails. Around 1860, Louis Henry Meyer, the former president of the Fort Wayne Railway company and one of the founders of the Staten Island Savings Bank, purchased 18 acres of land along present-day Fingerboard Road. 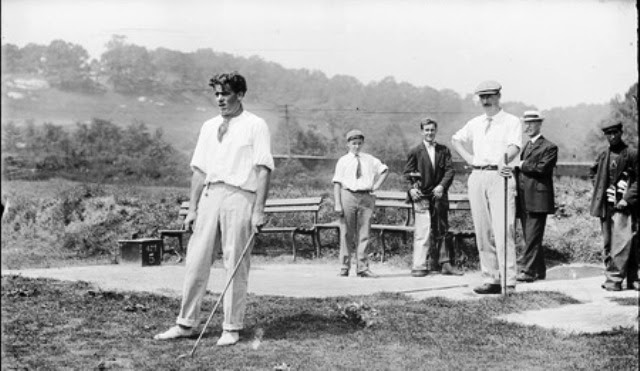 With the goats gone, golfers including Walter Clark and Isaac Mackie could enjoy a round of golf at Fox Hills in August 1905.
This acreage was part of a land grant dating back to 1685, and had been previously owned by Samuel H. Kelly (1685), George Brown (1691), Isaac Simonson (1749), Samuel Bowne (1852), and Manuel X Harmony (1859). Meyer invested $800,000 in Samuel Bowne’s manor home to make it one of the premier homes on Staten Island. In doing so, Meyer joined an exclusive group of men who established estates around the borough and called themselves the “Staten Island Barons.”
Two years after Meyer’s death in 1898, Fox Hills Golf Club was founded with 200 members. The 18-hole course, which had been laid out on the former Meyer estate by the Staten Island Cricket Club in 1899, boasted the finest links in the tri-state area, with numerous sand traps and a large pond creating challenging obstacles for even the best golfers. (The 13th hole was so difficult it was nicknamed Hell’s Kitchen.) Its grounds encompassed what is today Park Hill (and the Park Hill Apartments), Celebration, and Eibs Pond. 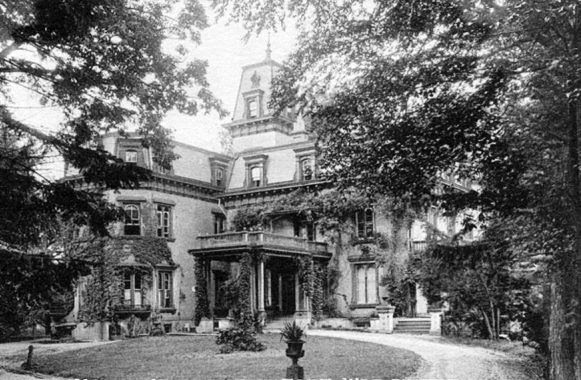 Louis Meyer named his estate Fox Hills Manor after his passion for fox hunting. In 1898, following his death, the 20-room estate served as a boardinghouse. The property then sat empty until Father Shealy purchased it in 1911 for a Jesuit retreat center, Mount Manresa. The villa was torn down in the 1960s, and in April 2014, the New York Province of the Society of Jesus sold the property to a developer of shopping malls and townhouse neighborhoods. That’s called progress.
The course was reportedly designed by Isaac Mackie, a native of Scotland and apprentice golf club maker who came to the U.S. to become a professional at Fox Hills. Mackie also competed on a national level in the U.S. Open from 1901 to 1921, and won the Eastern PGA Championship in 1908 at Fox Hills. 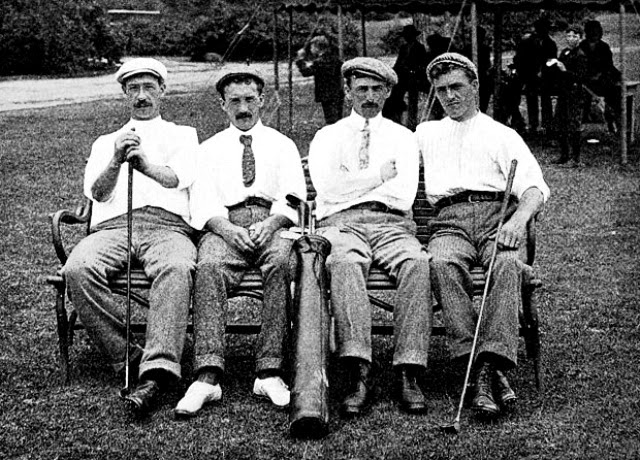 Fox Hills pro Isaac Mackie is pictured here (left) at the 1904 U.S. Open with Jack Hobens, Alex Ross, and George Thomson.
In 1918 during the first World War, Hoff General Hospital No. 41 was built on land adjacent to the Fox Hills Golf Course. Constructed in a record four months at a cost of $2 million, the facility was the largest army hospital in the world with a capacity for 3,000 patients.
The Fox Hills Base Hospital, as it became known, operated until 1922, when it was determined that the rundown hospital had become a firetrap. The facility closed on March 7, 1922, and the few remaining patients were transferred to Sea View Hospital. 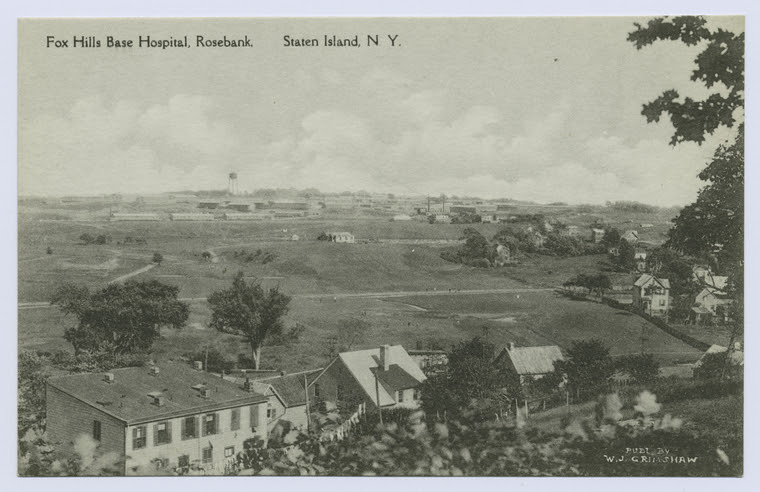 The Fox Hills Base Hospital, as it became known, featured three miles of interconnected covered wooden walkways with amenities like a barber shop, billiards room, general store, and 2,000-seat theater. It operated until 1922, when the last remaining patients were transferred to Sea View Hospital.
With the arrival of the Great Depression, the Fox Hills Golf Club was no longer sustainable. The club closed its doors in 1935. By that time, the goats were long gone. (Albeit, Staten Island was New York’s last stand for goats: In 1928, The New York Times reported that 130 Staten Island residents were still licensed to keep goats.)
During World War II, the U.S. Army reactivated the old Fox Hills property to serve as an army base, an Italian prisoners of war camp, and a trading post along Vanderbilt Avenue. When the war ended, the barracks became makeshift homes for veterans who faced a severe housing shortage in the late 1940s and early 1950s. The facility shut down completely in the early 1950s. 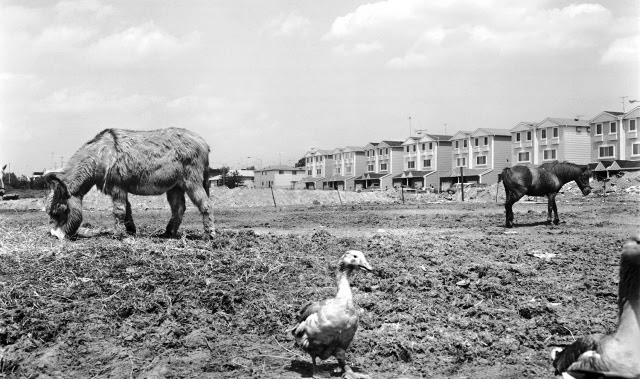 As late as the early 1970s, farm animals still grazed at large in Staten Island. These animals are grazing on yet-to-be-developed land near the Staten Island Mall on Richmond Avenue in New Springville.
Posted by Cheryl & ethnovet at 06:33