•
Four factors control Ca-normalized TE distribution in freshwater shells.
•
Element concentration and biochemical affinity are the first two factors.
•
Landscape and the proximity to hydrothermal/volcanic sources are the two other factors.
•
All species are significantly enriched by Mn relative to the river water.
•
TE distribution coefficients between the shells and water are similar for five species.

To reveal the geographical and inter-species variability of the major and trace element (TE) compositions of freshwater mussel shells across Eurasia, we used ICP MS after acid digestion to analyze 50 samples of shells from five species of the genus Margaritifera spp. (Bivalvia: Margaritiferidae) collected in 20 minor rivers located in NW Russia, Sakhalin, Amur basin, Kuril Islands, Kamchatka and Laos. The variations between replicates from the same site were smaller than the variations between samples from different localities or between different mollusk species. Using normed PCA, we observed significant biological and geographical controls of the trace element composition in freshwater shells, with five main species exhibiting distinct features of TE concentration corresponding to four major geographical locations. Four PCA factors explain 81% of the TE variability, which is closely linked to specific geographical location and weakly linked to the identity of the species. The first two factors (F1 × F2) are the element concentration and its biological affinity. The other two factors (F3 × F4) likely are the nutrient status of the river, corresponding to its proximity to wetlands or mountains, and the degree of the influence of volcanic/hydrothermal activity. The analysis of water samples collected during the active growth period in summer baseflow was used to quantify the distribution coefficients (Kd) of trace elements between the aragonite shells and the river water. All species are significantly enriched in Mn relative to the river water, with distribution coefficients of up to 5. The other elements exhibit Kd values that were similar for the five species. This suggests that the obtained distribution coefficients may be universal constants reflecting uptake of each element by the organism from the river water and its intracellular transport and biocalcification processes. Taken together, the chemical composition data for pearl mussel shells may not only reflect the geographical locality and species identity but also provide insights into biochemical processes of element uptake in the form of biominerals. 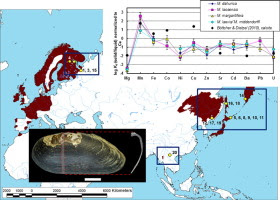