•
A clinical observational study in the treatment of hay fever symptoms.
•
MYMOP questionnaires were used for patient-reported outcome.
•
Homeopathy treatment was associated with significant alleviation of hay fever symptoms.
•
All patients reported reducing the use of conventional medicines.
•
The results of this study indicate towards a future pilot pragmatic study.

Seasonal allergic rhinitis (hay fever) is common and can considerably reduce the quality of life of sufferers. Despite the wide everyday application and promising results with homeopathy, scientific evidence of its effectiveness for most ailments is scarce.

The assessment of the clinical effectiveness of homeopathic remedies in the alleviation of hay fever symptoms in a typical clinical setting.

We performed a clinical observational study of eight patients in the treatment of hay fever symptoms over a two-year period (2012 and 2013) using Measure Yourself Medical Outcome Profile (MYMOP) self-evaluation questionnaires at baseline and again after two weeks and four weeks of homeopathic treatment. The individualized prescription – either a single remedy or multiple remedies – was based on the totality of each patient's symptoms.

Individualized homeopathic treatment was associated with significant alleviation of hay fever symptoms, enabling the reduction in use of conventional treatment. The results presented in this study can be considered as a step towards a pilot pragmatic study that would use more robust outcome measures and include a larger number of patients prescribed a single or a multiple homeopathic prescription on an individualized basis. 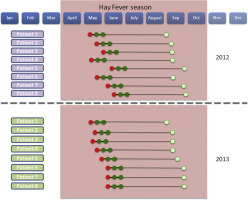 © 2016 The Faculty of Homeopathy. Published by Elsevier Ltd. All rights reserved.
Posted by Cheryl & ethnovet at 17:27