Plastic mistaken for prey by a colony-breeding Eleonora's falcon (Falco eleonorae) in the Mediterranean Sea, revealed by camera-trap

Discarded plastic is known to be harmful for marine animals through ingestion and entanglement. Here we report the first documentation of Eleonora's falcons providing plastic waste to dependent nestlings. Eleonora's falcons breed colonially on sea cliffs and islets in areas of the Mediterranean Sea and the Canary Islands in which they normally feed their nestlings exclusively with small migratory birds.

The accumulation of floating plastic debris in the Mediterranean Sea is estimated to be between 1000 and 3000 tons and is thought to be correlated with the high level of anthropogenic pressure in the area in addition to the hydrodynamics of this semi-enclosed basin (Cózar et al., 2015). It has been well documented that plastic and debris can have devastating effects on fish, sea birds and marine mammals through ingestion and entanglement (Gregory, 2009), e.g. surface feeding seabirds such as Procellariiformes and Laridae gulls often fall victim to floating plastic waste as they mistake it for food on the water's surface. Here the birds either consume the plastic directly (e.g. Moser and Lee (1992); Ryan (2008) and Tanaka et al. (2013)) or gather it for provisioning to dependent chicks (Rodriguez et al., 2012). In contrast to seabirds, most birds of prey are specialized on hunting live prey and until now have not been reported to eat or provide nestlings with plastic garbage, with the exceptions of carrion feeding vultures ( Ferro, 2000 and Mee et al., 2007) and secondary ingestion for bald eagles via predation of plastic-contaminated seabirds (Day et al., 1985). Nevertheless, during a study into the dietary composition of breeding Eleonora's falcons (Falco eleonorae) in the Aegean Sea, we recorded by use of a camera trap (Reconyx PC900), an instance where an item of plastic packaging was seemingly mistaken for prey and subsequently provisioned to its offspring. Since observations like this one are very rare, reporting the time and location of such an event is of great value as it highlights the need for further investigation into the potential harmful effects of plastic waste on birds of prey as well as aiding in conservation awareness. Time efficient remote in situ monitoring of prey deliveries at raptor nests has only recently been achievable due to modern developments in video technology ( Dawson and Bortolotti, 2000, Steen et al., 2011 and Steen et al., 2012). Additionally, this technology now allows us to attain high clarity, close proximity images of unique behavior rarely seen by direct human observations (e.g. Horton et al. (2014); Sato et al. (2010) and Steen and Sonerud (2012)).
Eleonora's falcons breed colonially on sea cliffs and islets in the Mediterranean area during late summer and early autumn. Here they feed their nestlings almost exclusively with small migratory birds migrating from Europe to Africa during the months of August and September (Walter, 1979). Prey is captured in mid-air, mainly over open water within close proximity to the shore, or directly above the small offshore islets where the falcons breed (Walter, 1979). Therefore, the birds' presence in these environments during their breeding season increases the potential for exposure to anthropogenic debris from marine based sources. For this study, camera traps were set up within a colony located on the small islet of Anidro, situated in the eastern region of the Aegean Sea, Greece (37°24′N, 26°29′E) in 2013, 2014 and 2015 (four nest each year). Camera monitoring occurred around the clock for around 80 days and was distributed over a total of twelve nests during the complete study period, i.e. on average about 6.7 days per nest. The main objective of the study was to monitor various aspects of food provisioning by Eleonora's falcon by use of camera-traps.
On the 13th September 2015, we observed the following from a camera trap placed at one of the study nests; the parental female arrived at the nest with plastic waste (snack wrapper), which she successively started to feed to the nestlings, see Fig. 1. As the islet is remote, uninhabited and surrounded by sea and the fact that Eleonora's falcons capture prey over open water within close proximity to the shore, or directly above the small offshore islets where the falcons breed (Walter, 1979), it is probable that the wrapper came from a marine based source which subsequently entered the airspace by strong winds. This led to the capture of the wrapper by the female bird which potentially mistook it for a small bird or large insect during hunting. The female handled the wrapper for about 12 min and she performed movements typical for dismembering and provisioning prey in morsels to the nestlings, see Supplementary video material. The amount of wrapper that was fed to the nestlings is uncertain, though at least some of the wrapper remained at the nest site after the feeding bout. To our knowledge, this is the first observation of a bird of prey providing discarded plastic to dependent nestlings. We assume that this is a relatively uncommon occurrence as this was the only instance of plastic provisioning within the 80 days of monitoring distributed over the twelve nests (~ among 370 prey items, preliminary results), although comprehensive camera monitoring in the future might uncover similar events. 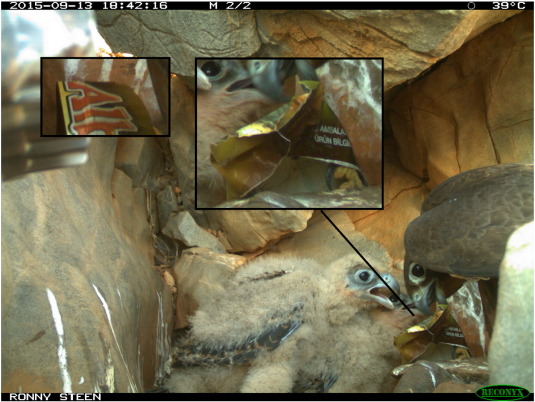 
The following are the supplementary data related to this article.

This study was supported by grants from the Nansenfondet. We thank the team of students at Archipelagos Institute of Marine Conservation and Jostein Meisdalen for assistance during the fieldwork.