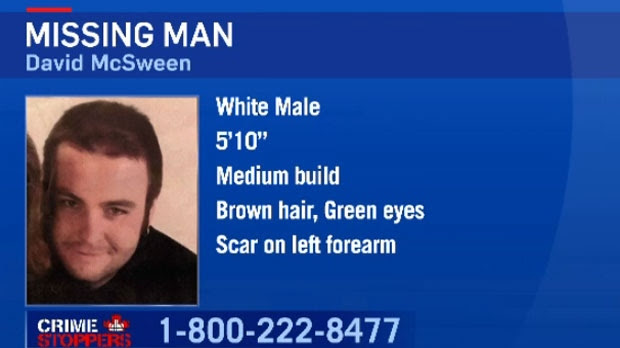 The family of David McSween is worried for his safety after a Monday night crash on the TransCanada Highway near Dead Man's Flats.

Published Saturday, January 28, 2017 5:08PM MST
Last Updated Sunday, January 29, 2017 11:55AM MST
Family members and the Calgary Police Service are asking for help from the public as they search for a 34-year-old father who was last seen Monday night on the TransCanada Highway outside Canmore.
David McSween of Calgary was driving his 2015 Nissan Sentra on the TransCanada Highway near Dead Man’s Flats when his car was involved in a collision.
“From what we know, we believe he rear-ended a semi-truck near Canmore at Dead Man’s Flats and he wasn’t at the car when (RCMP) arrived,” said Leah McSween, David's sister. “He was a little off that day and that evening from what we understand.”

Supplied photos of David McSween who was last seen Monday, January 23 on the TransCanada Highway near Dead Man's Flats
“This is very out of character for him. It’s not like him at all. It came from left field.”
According to police, there are reports indicating David McSween was standing next to his damaged vehicle at around 10:00 p.m. but the 34-year-old was not at the crash scene when officers arrived. Police suspect McSween was offered a ride from a passing motorist.
Leah says David left his home in Calgary at around 8:00 p.m. Monday and the family has not heard from him since.
“We don’t sleep at night. We don’t know if he’s going to come home at night and every time the phone rings we think it’s going to be him,” said Leah. “He does have a daughter. We can’t tell her anything.  We really don’t know what to say to her.”
Leah hopes her brother is in a condition where he can reach out to her six-year-old niece but the fact David has not attempted to call his daughter has Leah worried. “He loves that kid more than anything. He loves spending time with her and we love having her around.”
The 34-year-old is described as a:
At the time of his departure from Calgary, McSween was wearing a grey Under Armour hoodie, jeans and black shoes.
Leah says David has been under a lot of stress of late as his lost his job in the last year and has helped to care for a family member facing medical concerns.
The family is not aware of any friends David may have had out-of-province or in Canmore and they are not sure where David was planning to drive to on Monday night.
“I just want him home," said Leah. "I don’t know if he’s dead in a ditch somewhere or if he’s just laying low but we just want him home. We just want to know he’s okay.”
Anyone with information regarding McSween’s whereabouts is asked to contact the Calgary Police Service, 403-266-1234, or Crime Stoppers.
Posted by Cheryl & ethnovet at 04:12