Purple corn is fast approaching classification as a functional food—an integral component of the diet that provides energy and essential nutrients. Researchers in the fields of food and nutrition are intensely searching for functional foods in almost every corner of the world and from a diversity of plants. Examples include purple corn (Zea mays L., Poaceae), green tea (Camellia sinensis [L.] Kuntze, Theaceae), soy isoflavones (Glycine max [L.] Merr., Fabaceae), various nuts, plus various other natural substances in the human diet containing antioxidant and other substances with alleged or proven potential disease-preventive properties.
Purple corn (frequently referred to as blue corn) is botanically the same species as regular table corn. Yet by a twist of nature, this corn produces kernels with one of the deepest shades of purple found anywhere in the plant “kingdom.” Research has shown that purple corn contains cell-protecting antioxidants with the ability to inhibit carcinogen-induced tumors in rats. Many plant-derived substances are believed to show these properties, but few have also demonstrated anti-inflammatory capabilities and the potential to help prevent obesity.
The kernels of purple corn (maiz morado in Spanish) have long been used by the people of the Peruvian Andes to color foods and beverages, a practice just beginning to become popularized in the industrialized world. They also make a fermented/alcoholic drink from the kernels which they call chicha morada.1 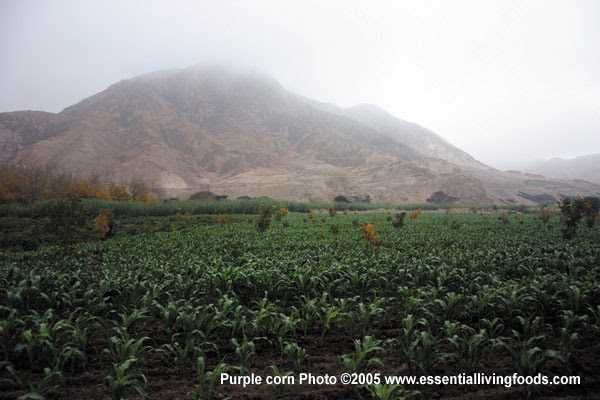 Rich in Anthocyanins
The source of this natural alternative to synthetic food dyes is the largest group of natural, water-soluble pigments in the plant world, known as “anthocyanins.”2 (The word anthocyanin is derived from the Greek terms, anthos, meaning flower, and kyanos, meaning blue.3) Anthocyanins are responsible for the purple, violet, and red colors attending many plants. Anthocyanins belong to an even larger class of plant chemicals known as flavonoids and are found in diverse plants, including many food plants.4
Researchers at the Horticultural Sciences Department of Texas A&M University in College Station, Texas, recently determined that the mean anthocyanin content of whole, fresh purple corn from Peru was 16.4 mg/g, which was much higher than fresh blueberries (1.3-3.8 mg/g). On a dry weight basis, the mean content of purple corn was comparable to blueberries (17.7 and 9.2-24.0 mg/g, respectively). The kernel pericarp held by far the greatest concentration of anthocyanins, contributing 45% of the total content. More intriguing, the in vitro antiradical capacity of purple corn extract against the DPPH (2,2-diphenyl-1-picrylhydrazyl) radical was greater than that of blueberries (Vaccinium corymbosum L., Ericaceae), which have shown higher antioxidant values than many other commercial food plants.5
Powerful Antioxidant Kenneth Jones is a medical writer specializing in the field of medicinal plants. He is the co-author of Botanical Medicines: The Desk References for Major Herbal Supplements by McKenna, Jones, and Hughes (Haworth Herbal Press, 2002). He has no affiliation with any commercial producers of purple corn or any of the other products mentioned in this article.