Article first published online: 29 MAR 2015
DOI: 10.1111/ecoj.12188
© 2015 The Authors. The Economic Journal published by John Wiley & Sons Ltd on behalf of Royal Economic Society.
This is an open access article under the terms of the Creative Commons Attribution-NonCommercial License, which permits use, distribution and reproduction in any medium, provided the original work is properly cited and is not used for commercial purposes.
Issue 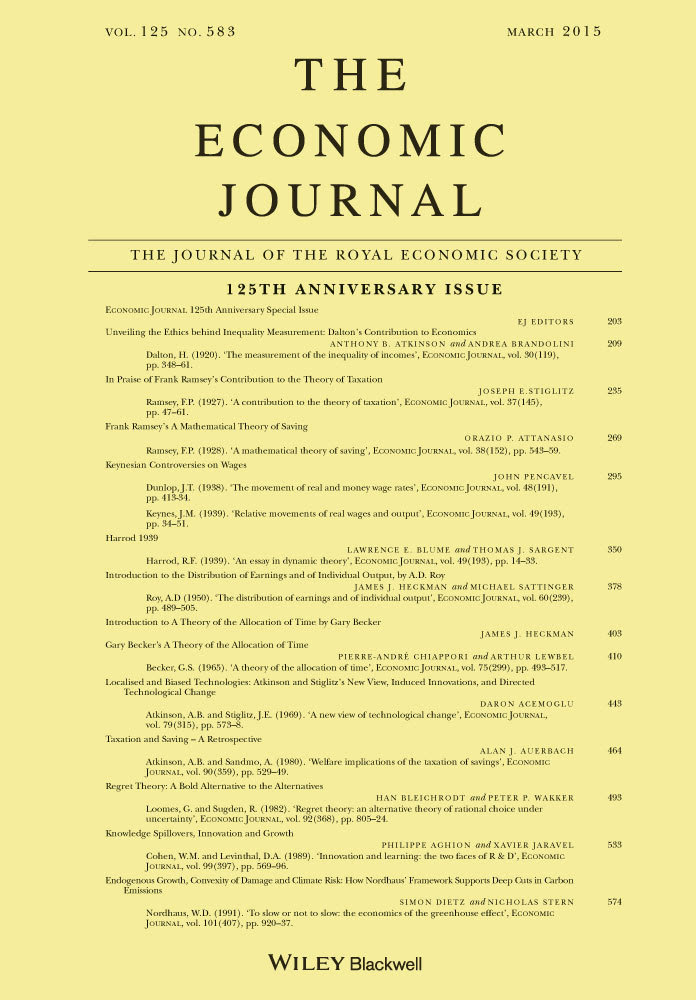 ‘To slow or not to slow’ (Nordhaus, 1991) was the first economic appraisal of greenhouse gas emissions abatement and founded a large literature on a topic of worldwide importance. We offer our assessment of the original article and trace its legacy, in particular Nordhaus's later series of ‘DICE’ models. From this work, many have drawn the conclusion that an efficient global emissions abatement policy comprises modest and modestly increasing controls. We use DICE itself to provide an initial illustration that, if the analysis is extended to take more strongly into account three essential elements of the climate problem – the endogeneity of growth, the convexity of damage and climate risk – optimal policy comprises strong controls.

1 To Slow or Not to Slow

‘To slow or not to slow’ by Bill Nordhaus (1991) is a landmark in economic research. As the first analysis of the costs and benefits of policies to abate greenhouse gas emissions,1 it opened the profession to a new field of application – climate change. Its importance is partly illustrated by the number of times that it has been cited – on 1,150 occasions according to Google Scholar; 398 times according to the narrower, journals-only measure in ISI Web of Knowledge.2
The context within which Nordhaus's paper was written helps us understand its contribution. While the basic science of the greenhouse effect was set out in the nineteenth century by Fourier, Tyndall and Arrhenius, discussions surrounding the possible role of humans in enhancing it – and therefore causing global warming and climate change – began in earnest in the 1970s. For at least a decade, climate change remained largely a scientific/environmentalist's issue, debated in specialist conferences and networks (Agrawala, 1998). Indeed, it is important to stress that the science of climate change was running years ahead of the economics (something that arguably remains the case today in understanding the impacts of climate change; Stern, 2013).
By the late 1980s, however, climate change was becoming both a policy issue and increasingly political. In 1988, the Intergovernmental Panel on Climate Change (IPCC) was established and in 1990 it published the first of its regular and influential Assessment Reports to member governments. In 1989, the first meeting of (22) Heads of State to discuss climate change was held in the Netherlands and various other major international summits that year also put it on the agenda. Most OECD countries already had their first climate-change targets by 1990 (Gupta, 2010), for instance the European Community, as it was then, had pledged to stabilise its carbon dioxide emissions at 1990 levels by 2000. In 1992, virtually all countries signed up to the United Nations Framework Convention on Climate Change (UNFCCC) at a major summit on the environment and development in Rio de Janeiro, with its objective to achieve ‘stabilization of greenhouse gas concentrations in the atmosphere at a level that would prevent dangerous anthropogenic interference with the climate system’ (Article 2).
Yet despite the obvious ecological risks of unmitigated climate change, the question remained whether the benefits of avoiding these risks would outweigh the perhaps substantial cost of cutting emissions.3 This is the central question that ‘To slow or not to slow’ sought to tackle, by combining a simple model of social welfare and production with an externality from greenhouse gas emissions, in general equilibrium. This model took ‘existing models and simplified them into a few equations that are easily understood and manipulated’ (p. 920), something that has become a hallmark of Nordhaus's work in the area. In summary, the main components of the model are:

This modelling framework has had a lasting influence on the field and indeed several elements of it still constitute the ‘industry standard’ today. The most notable example of this is perhaps the idea of reduced-form damage.
According to the model, Nordhaus found that an optimal cut in the current flow of global emissions of 11% relative to the base level should be made in a medium scenario (given a rate of pure-time preference of 1% per annum and ‘medium’ damage). In a ‘high’ scenario, with no pure-time discounting and ‘high’ damage, a cut of global emissions of around one third would be optimal. The concluding Section of this article lays out these results, without commenting on the plausibility of the various scenarios. Nonetheless, that the optimal emissions cuts were not more than one third implied that only modest targets could be supported by economic analysis of this kind, in comparison with some targets being discussed in the political arena. As the editor of the issue in which the paper appeared wrote, it is ‘certainly a sobering antidote to some of the more extravagant claims for the effects of global warming’ (Greenaway, 1991, p. 903).
Posted by Cheryl & ethnovet at 06:59