No safe haven for polar bears in warming Arctic 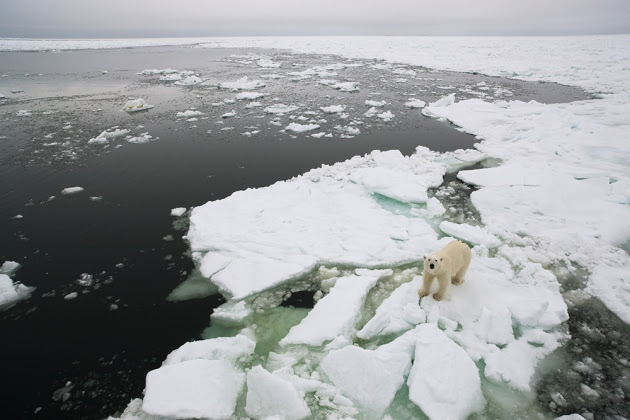 Theo Allofs/Minden Pictures/FLPA
Polar bears' sea-ice habitat is dwindling as the Arctic warms.
Not a single polar-bear haven in the rapidly warming Arctic is safe from the effects of climate change, researchers have found.
Polar bears (Ursus maritimus) rely on sea ice for roaming, breeding, and as a platform from which to hunt seals. When the ice melts in the summer, the bears spend several months on land, largely fasting, until the freeze-up allows them to resume hunting. So if they are to survive, they need pockets of ice to persist almost year-round.
Some climate models suggest that most of the Arctic may be ice-free in summer by mid-century[1]. But icy refuges near the North Pole currently support 19 populations of polar bears, totalling some 25,000 individuals.  Scientists weren’t sure about the exact rate of ice retreat in these habitats, or whether some refuges might not yet be dwindling.

All of the Arctic refuges are in fact on the decline, a detailed examination of satellite data now suggests. Mathematician Harry Stern and biologist Kristin Laidre at the University of Washington in Seattle used a 35-year satellite record to examine each of the 19 population areas, which range from 53,000 to 281,000 square kilometres in size. For each, they calculated the dates on which sea ice retreated in the Arctic spring and advanced in the autumn, as well as the average summer sea-ice concentration and number of ice-covered days.
In all the refuges, the researchers found a trend towards sea-ice retreating earlier in spring and advancing later in autumn. The time span between the sea-ice maximum in March and the sea-ice minimum in September has lengthened by up to nine weeks since 1979 when satellite observations began, they report in The Cryosphere2.

The measurements show that polar bear habitats are all being put under strain, the researchers say. “The spring ice break-up and fall ice advance roughly bound the duration of time polar bears have to feed, find mates and breed,” Laidre says.
Dwindling ice conditions have been previously shown to affect polar bears’ abundance and health: for example, polar bear metabolism doesn’t seem to slow much when sea ice melts and food becomes scarce, suggesting that the bears don’t have a way to conserve energy to survive summer fasts2.
Five Arctic range nations — the United States, Canada, Greenland, Norway and Russia — in 2015 adopted a ten-year circumpolar action plan on polar-bear conservation. Using common measurements of habitat change for all polar-bear refuges will guide that plan’s implementation and help to coordinate national conservation efforts, says Dag Vongraven of the Norwegian Polar Research Institute in Tromsø, who co-chairs the polar-bear specialist group of the International Union for Conservation of Nature.