1903: A Fine Funeral for Dane, the Beloved Irish Setter of Harlem 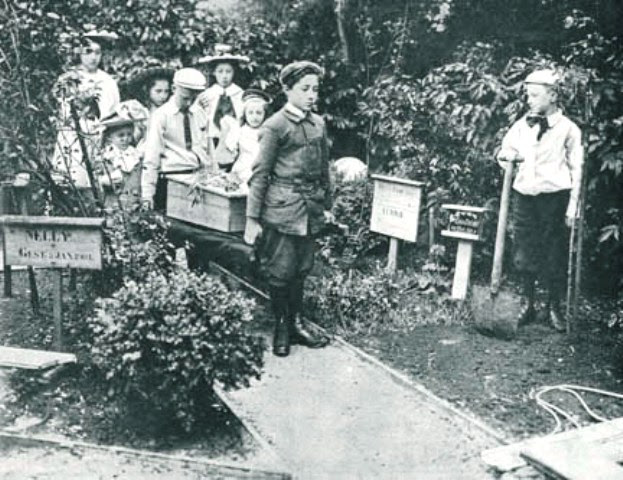 Children attend a pet burial a pet cemetery sometime around 1900.
“Pax vobiscum,” chanted the dog burier, and Dane, the Irish setter, was laid to his final rest.”–The New York Evening World, September 19, 1903
One day in September 1903, William and Ada Larson took a trip to Manhattan Beach in Brooklyn. The weather was obviously pleasant, because they left a window open in their new apartment at 246 West 114th Street in Harlem. This particular window led to a fire escape, which was a favorite sleeping spot for their seven-year-old Irish setter, Dane.
Dane had been living with the Larsons since 1896, when the young couple was living in St. Paul, Minnesota. William C. Larson, a broker, had been born in Wisconsin in 1868, and Ada M. Larson was born in Minnesota in 1865. The couple never had children, and so they treated Dane like their baby.
When the Larsons and Dane moved from Minnesota to 246 West 114th Street, the five-story brick, brownstone, limestone, and terracotta “Old Law” tenement was brand new. Designed by architect John P. Leo and constructed in 1899, No. 246 was one of 36 Renaissance Revival-style buildings constructed between 1896 and 1900 on West 114th Street between today’s Adam Clayton Powell Jr. Boulevard and Frederick Douglass Boulevard. 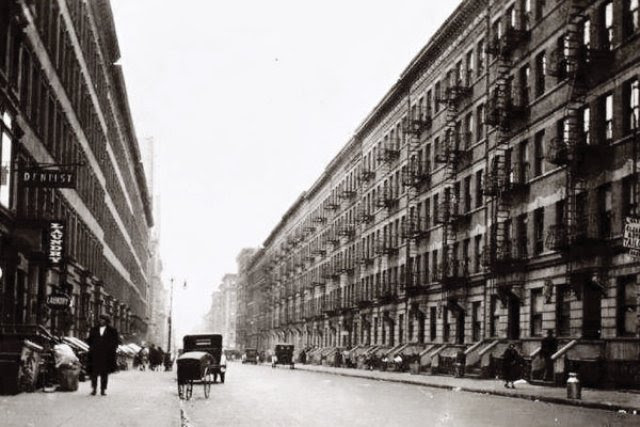 The Larsons and their Irish Setter, Dane, lived at 246 West 114th Street in Harlem, which was one of 36 five-story “Old Law” tenements on the block (pictured here in 1928). The Larson’s building was on the south side of the street, near what was then still called Eighth Avenue (Frederick Douglas Boulevard). The fire escape was a favorite spot for Dane on warm nights. New York Public Library Digital Collections
A Brief History of West 114th Street
The section of Harlem in which the Larsons and Dane lived has an interesting post-Native history going back to March 1637, when Dr. Jean Mousnier de la Montagne, a Protestant in exile from France, arrived in America following a six-month journey on the ship Rensselaerswyck. This ship was owned by the Dutch patroon Kiliaen Van Rensselaer and by Gerard DeForest, the uncle of Montagne’s wife, Rachel.
Immediately upon arrival, the well educated Dr. Montagne set up shop as a physician and ship chandler, while the DeForests, including sons Henry and Isaac, established a 200-acre tobacco farm called Vredendahl (or Quiet Dale) on land known to the Indians as “Muscoota” (flat place, as it lied just east of the rugged cliffs of Manhattan schist (now Morningside Park).
The DeForest farm was divided by Harlem Lane (sometimes called the Kingsbridge Road; today called St. Nicholas Avenue), and ran from about present-day 109th Street (northern part of Central Park) to 124th Street. 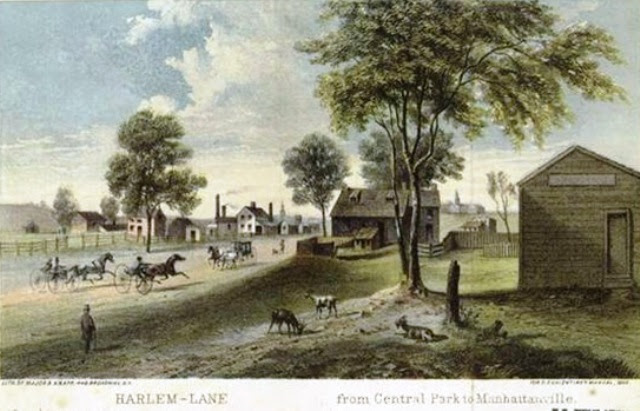 The old Harlem Lane — once a Native American path called Weekquaeskeek and now called St. Nicholas Avenue — served as the dividing line of the DeForest farm, which was established around 1637. This area, later known as Montagne’s Land or Montagne’s Flat, remained farmland through the early nineteenth century.
Shortly after arriving in the New World, Henry DeForest died, leaving Dr. Montagne in charge of the tobacco farm. Dr. Montagne built a small bark cabin for his family at the present intersection of St. Nicholas Avenue, Seventh Avenue, and West 116th Street. For the next 200 years, the land remained undeveloped farmland.
Sometime around 1812, David Wood purchased the land and built his own farmhouse on present-day West 114th Street near 7th Avenue (the site of the Wadleigh High School for Girls, built in 1901-02). Following Wood’s death on May I2, I842, the land reverted to his widow and children.
By this time, the New York and Harlem Railroad had already begun providing access to Harlem’s farmland north of 110th Street. However, with options for commuters still limited, small shantytowns began to pop up as many of the old farms that were not sold for development were abandoned. 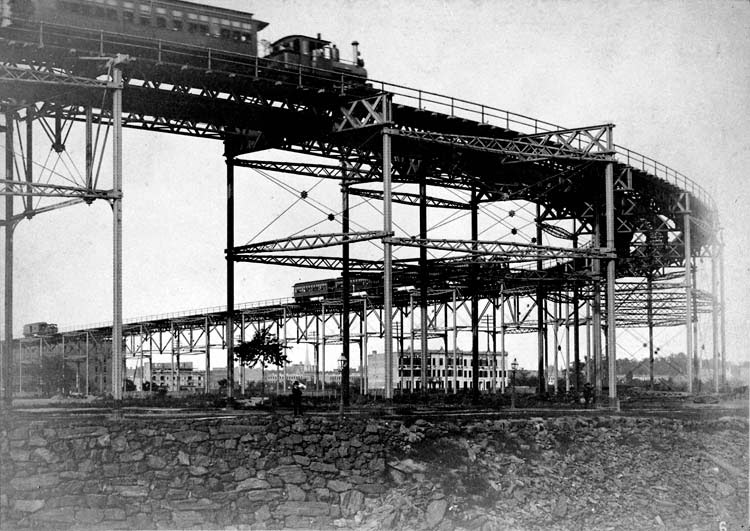 The 9th Avenue elevated train dramatically changed Harlem by providing an option for Manhattan commuters who moved north in the late 1800s. The famous S-curve shown here — often called Suicide Curve — allowed the tracks of the 9th Avenue El to switch over to 8th Avenue at 110th Street.
The face of Harlem changed dramatically between 1878 and 1881, when the elevated train lines were extended into the area. The Ninth Avenue elevated train, in particular, had a huge impact on Harlem as it paved the way for a surge of speculative construction on the west side — such as the Old Law tenements on West 114th Street where Dane lived with his human mother and father. 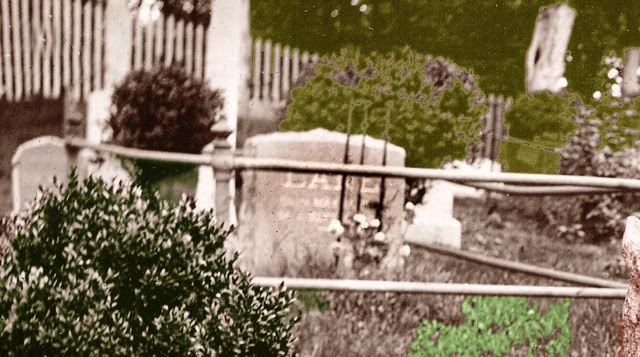 Dane’s enclosed grave site and monument at Hartsdale Pet Cemetery. Photo courtesy of Hartsdale Pet Cemetery archives.
Dane’s Final Nap
On that fateful day in September, Dane chose to take a nap on the fire escape while his human parents were away. He somehow rolled off in his sleep and fell to his death (one report said he jumped out the window). When the Larsons returned home and saw all their neighbors surrounding Dane’s body, Mrs. Larson fainted on the street. 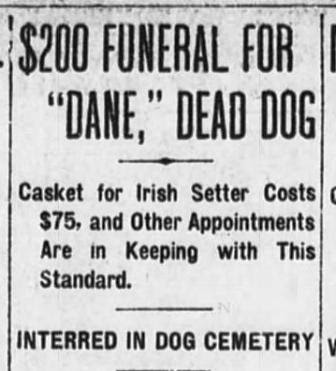 The following day, the Larsons set out to find an undertaker who would embalm their dog and conduct a proper burial. An undertaker named Christian F. Greenwald at 2134 Eighth Avenue, just north of 115th Street, agreed to embalm the Irish setter and make arrangements to have him buried in the dog and cat cemetery at Hartsdale.
Reportedly, C.F. Greenwald specialized in embalming dogs, cats, and other small animals, and he had a working relationship with Dr. Johnson, a prominent New York veterinarian who helped establish the pet cemetery on his apple orchard in Westchester County.
After taking Dane’s body to his shop, Christian Greenwald embalmed the dog and prepared a small oak casket (engraved with “Dane” in silver lettering and lined with white satin). Dane was placed on his side with his head on a bed of lilies of the valley; roses and other flowers were placed over his body. After the casket was placed on a pedestal, a photographer reportedly took a “flashlight” photograph of Dane. 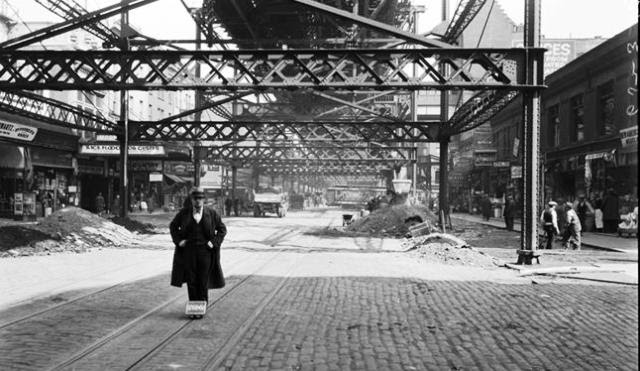 Christian F. Greenwald embalmed Dane and other pets at his shop at 2134 8th Avenue. In 1927, when this photo was taken, No. 2134 (2-story building at right) was occupied by a fruit and vegetable market. Next door, in the same building, were a billiards parlor and a meat market. Museum of the City of New York Collections
“Thousands of people came to see Dane when he was in his coffin. He was a beautiful animal and looked exactly as if he were asleep. People came in crowds and we had to make them come in line, and we kept open all night, for one person telling another they came from all parts of the city to see him.”–C. F. Greenwald, Newport News Daily Press, October 7, 1907
On the morning of his burial, Mrs. Larson — heavily veiled — and several neighbors came to say goodbye to Dane before taking the train to the Hartsdale Pet Cemetery. When Greenwald closed the casket, Mrs. Larson said, “Don’t lock it. I want to put inside Dane’s collar and leash and whip and plate. I could not bear to have those remainders of the dear dog about the house.” (I can’t bear that she used a whip on him!) 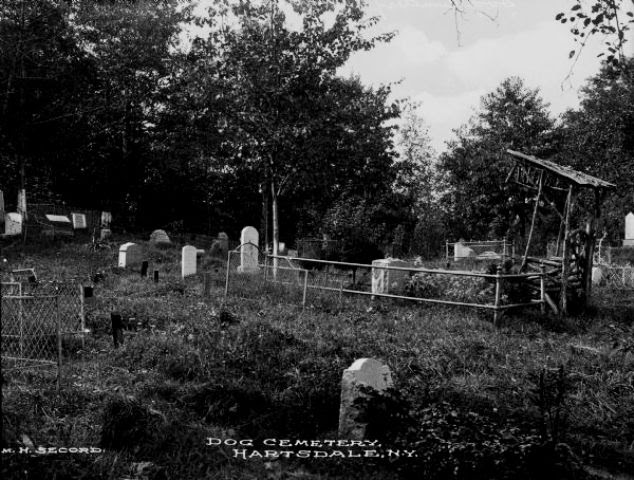 When Dane was buried at Hartsdale, his enclosed grave site, pictured here, featured a large monument and a rustic seat for visitors. Photo by  Mr. William H. Secord, Hartsdale postmaster, from Hartsdale Pet Cemetery archives.
At the solemn cemetery, Ada Larson and a little girl tossed flowers onto the grave. Ada sobbed violently and was led away by her friends. One woman told a reporter that she was only a neighbor, but she loved Dane as if he had been her own dog. 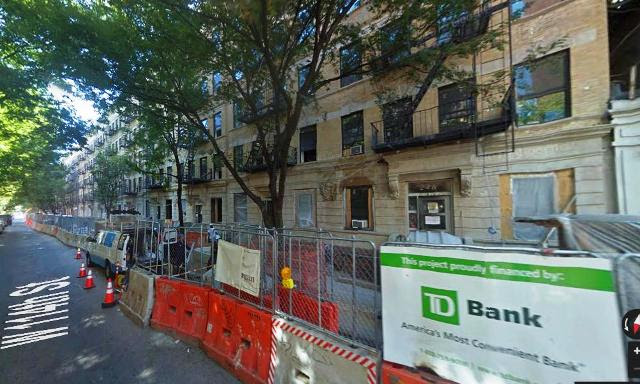 In the 1970s, the New York Housing Authority acquired what are now called the A. Phillip Randolph Houses on West 114th Street. Over the years the buildings have greatly deteriorated, but renovation plans are underway. A screen capture from Google Streets shows that work is in progress at No. 246, pictured here, and along the rest of the block. 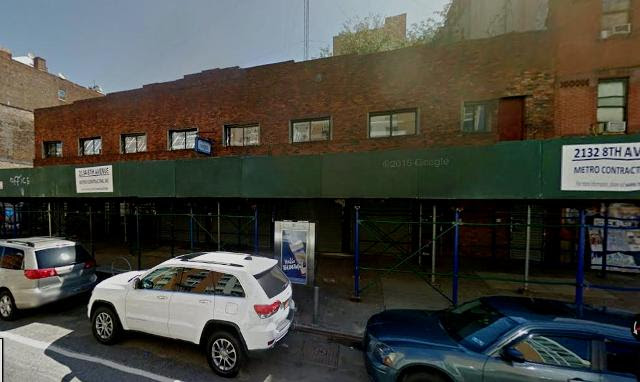 2134 Eighth Avenue, where Christian F. Greenwald prepared Dane for his final resting place, has had a troubled history, including a chain of mortgage foreclosures and repossessions. In 1980, the property was seized by the federal government as part of a major narcotics trafficking case. In more recent years, part of the building was occupied by the Masjid Aqsa mosque, which was evicted in 2013 following a rent dispute. The Hartsdale Pet Cemetery in Westchester County remains a wonderful resting place for treasured pets of all kinds. Photo, P. Gavan
Posted by Cheryl & ethnovet at 14:22