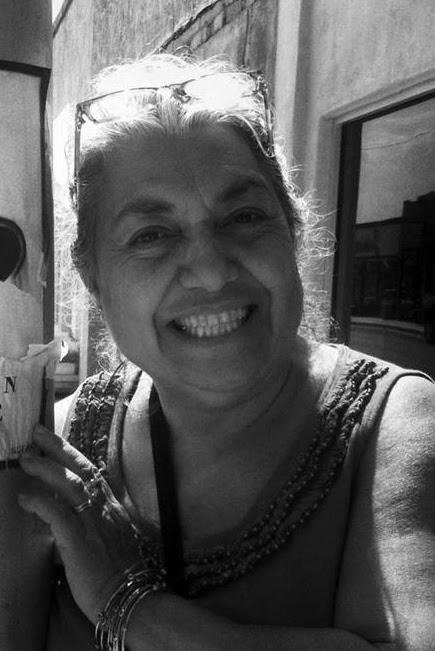 Kathe Koumoutseas, an ardent plant enthusiast, gardener, and former horticultural designer for the United States Botanic Garden (USBG), died at her home on Christmas morning surrounded by her family. She was born Katherine Lagoutaris in June 1950 to Merope Lagoutaris and Panagioti Malliaros on the Greek island of Lesbos (“I’m a true ‘lesbian,’ as was my father, and grandfather,” she would quip.)

At age five, she moved to the United States with her mother. Kathe grew up in Lowell, Massachusetts, and graduated from Lowell High School. She later attended Prince George’s Community College in Maryland.

She was a lover of life — particularly herbs and medicinal plants — and was always one to follow her passions and dreams. She collected Indian, Asian, and Native American art, designed and marketed her own label of clothing and accessories, and worked for many years as a designer and horticulturist at the USBG on the main mall in Washington, DC. In the early 1990s, she curated a special exhibition at USBG on ethnobotany and medicinal plants, and, when the garden was closing for a multi-year architectural restoration, she salvaged numerous tropical medicinal plants and sent them for permanent placement at the American Botanical Council’s (ABC's) then-new headquarters in Austin, Texas.

“For more than 17 years, thousands of visitors to ABC’s historic homestead have directly benefitted from Kathe’s gift of many of the beautiful tropical plants formerly at USBG,” said ABC Founder and Executive Director Mark Blumenthal. “They receive special care from ABC’s garden team, and we are deeply grateful to her for her trust and confidence in ABC’s ability to steward them properly.”

An avid gardener with a green thumb, Kathe’s home garden in Fort Washington, Maryland, contained many beautiful ornamental, culinary, and medicinal plants, as well as her beloved wind chime collection.

In recent years, Kathe fulfilled her lifelong dream of journeying to the Amazon as a student of ethnobotany on a National Geographic expedition with the University of Delaware. On the expedition, she cataloged medicinal plants used by the indigenous Ese’Eja tribe and took part in a traditional ayahuasca healing ceremony. Kathe was also active in the movement to legalize medical cannabis (Cannabis spp., Cannabaceae) in Maryland and supported organizations dedicated to medicinal cannabis research and education.

A celebration of Kathe’s life is planned for March 25, 2017, in Washington, DC. She believed very strongly in causes for social and environmental justice, and donations were made in her memory to the Standing Rock Sioux tribe, the water protectors protesting the Dakota Access Pipeline construction in North Dakota.