Haunted by the mystery deaths in Nicaragua’s brutal sugarcane fields


Two brothers stand in a dusty alley in the town of Chichigalpa in Nicaragua. They stare with suspicion at Australian photographer Josh Mcdonald, who has just captured their image – a picture that won a Wellcome Image award last week for its depiction of the impact of a medical condition that has been devastating the male population of central America.
The illness is described as “chronic kidney disease of undetermined cause” and it is responsible for 75% of deaths of young and middle-aged men in Nicaragua. Workers in the sugarcane industry are worst affected, and the disease has been destroying families and communities for 20 years. Yet the cause remains unknown. 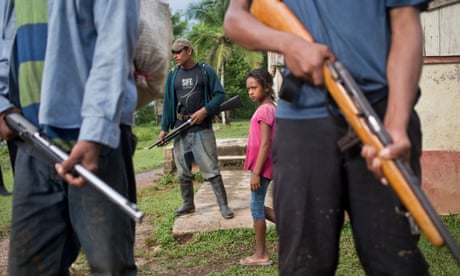 Read more
In the case of Mcdonald’s picture, the two boys are known to have lost uncles and cousins to the disease, although their mother still works as a sugarcane cutter. However, the boys were reluctant to speak to the photographer – perhaps because they thought their contact with someone from the developed world might jeopardise their chances of working in the fields themselves.
“It was early in the morning and I had walked out the backyard of the house where I was staying and into a back alley,” said Mcdonald.
“I saw the two standing there. They had arrived to buy flour, which was handed over the fence to them. They were not keen on talking to me, as you can see from their expressions. I managed to capture just the two images, this one and one where the boy on the right is reaching up to grab the bag of flour being handed down over the fence.”
Mcdonald later found out – after speaking to neighbours – that the boys had recently lost their uncles and cousins. Neither was receiving an education, and it is likely they will end up working in the sugarcane industry.
Their prospects are therefore grim. At least 20,000 people – most of them young agricultural workers – have died from chronic kidney disease in Nicaragua since it first came to the notice of doctors in the late 1990s.
Other countries in central America – such as Costa Rica – are also badly affected. “In the west, chronic kidney disease affects between 5% and 10% of people, most of them elderly or affected by diabetes,” said kidney expert Ben Caplin of University College London. “Less than 1% of people aged around 30 have chronic kidney disease in the UK. By contrast, in parts of Nicaragua that figure is 20% to 30% for people in the same age group.”
Caplin said that the only treatment for the condition was dialysis, but few machines are accessible to the poor in central America. Prevention remains the main hope for countering the condition. However, this prospect is limited by the fact that the cause of the spread of the disease through the young male population of Nicaragua is unknown.
“There is probably an occupational element,” said Caplin. “Conditions for sugarcane workers are absolutely brutal. They have to work in incredible heat – more than 40C – and they have limited personal protection against the toxic agents being used in fields. The sugarcane is also burned before being gathered and that releases all sorts of things into the air and the soil. So heat stress or pollution are possible agents.
“In addition, infectious diseases could be involved. There are a huge range of potential causes but until we find out what they are, we cannot hope to halt these deaths.”
The tragedy, said Caplin, is that the disease has been known about for more than a decade yet no effective action to counter it has been taken. “I think it is an indictment of public and occupational health across the world that we have not sorted this out. If this was happening in the west it would have been dealt with long ago,” said Caplin, who is working on a long-term project – with the Autonomous University of Nicaragua and the London School of Hygiene and Tropical Medicine – to reveal the roots of the condition.
Caplin said a similar pattern of illness was now being observed in south Asia, although he stressed the experts were not sure yet if it was the same disease.
The prospect is extremely worrying. As Mcdonald told the Observer, he spent much of his time in Nicaragua living in an area of Chichigalpa that is known as “the island of widows” – a name that reflects that devastating rate of male deaths there. “The lady I lived with had lost her husband, two sons and many friends to chronic kidney disease,” he said. “Life is really, really grim there.”
Posted by Cheryl & ethnovet at 13:14