Oxford University will be at the forefront of a multimillion-pound research program, which hopes to help develop new therapies for acute and chronic conditions by examining the effects of medical cannabis.
The oldest university in England will be teaming up with private equity company, Kingsley Capital Partners who will provide up to £10 million ($12.36 million) in initial investment, which will be funded through its new biopharmaceutical firm Oxford Cannabinoid Technologies (OCT). 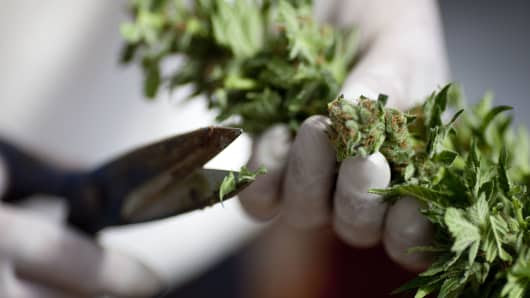 Uriel Sinai | Getty Images News | Getty Images
A worker trims cannabis at the growing facility of the Tikun Olam company on March 7, 2011 near the northern city of Safed, Israel.
The partnership is expected to bring together Kingsley's financial backing and Oxford's clinical expertise and research in immunology, neuroscience and cancer, to find ways of developing new treatments for those suffering with pain, cancer and inflammatory disease.
Scientists at the university expect to do this by studying the cellular, molecular, and systems mechanisms of cannabinoids.
"Cannabinoid research has started to produce exciting biological discoveries and this research program is a timely opportunity to increase our understanding of the role of cannabinoids in health and disease," Ahmed Ahmed, professor of gynaecological oncology at Oxford University, said in a statement.
While medical cannabis and cannabinoid medicine has been seen as providing support to patients who've been in pain; research into the particular pathways and mechanisms that produce this benefit is currently "limited and long overdue", Neil Mahapatra, managing partner at Kingsley Capital Partners, explained.
"Through OCT, we hope our strategic partnership with Oxford will support the development of innovative new therapies to help millions of people around the world," he added.

Relaxation of laws means that cannabis is a growing opportunity: Investor
The project has even received a public endorsement from Star Trek and X-Men actor Patrick Stewart, who admitted in a statement to using cannabis-based products to help the ortho-arthritis in his hands – a recommendation provided by a doctor in Los Angeles two years ago.
At present, cannabis is not permitted in the U.K. despite calls for its legislation, however, the cannabis-based ingredient, cannabidiol has recently been classified as a medicine. In 2016, a cross-party group of U.K. politicians called upon the government to legalize medical cannabis, stating that there was a sound evidence base that revealed cannabis could be effective for a number of chronic conditions.
"I enthusiastically support the Oxford University Cannabis Research Plan. This is an important step forward for Britain in a field of research that has for too long been held back by prejudice, fear and ignorance," Actor Patrick Stewart said in a statement, emailed to CNBC.
"I believe this program of research might result in benefits for people like myself as well as millions of others."