Aleksandra Ippolitova
Everyday literacy and literate folklore from the twentieth century has for a long time been on the periphery of scholarly interest. One of the most widespread genres of everyday literacy is the culinary manuscript collection, but even this genre has attracted almost no attention thus far. 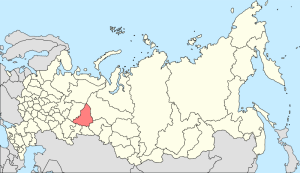 Sverdlovsk Oblast, where Verkhnee Dubrovo is located
(Wiki Commons)
In the late 1990s, I came across one such text in the home of a woman named Valentina Petrovna Ovchinnikova, who lives in the town of Verkhnee Dubrovo, some 35 km east of Ekaterinburg. The text was put together by Ovchinnikova’s mother, Maria Semenova Morozova, during the early twentieth century, in the years before the Russian Revolution of 1917, and gives a fascinating insight into the collection of culinary recipes in the modern period. 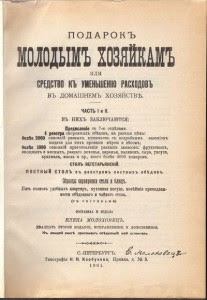 A Gift to Young Housewives
(kolovrat7520.ru)
Many of the recipes in Morozova’s collection were copied from A Gift to Young Housewives [Podarok molodym khoziakam] by E. I. Molokhovets, a hugely popular printed recipe book in pre-Revolutionary Russia, with around 300,000 copies being printed between 1861 and 1917. The collection is not just a copy of the Molokhovets text, but also includes a number of recipes Morozova added herself. These additional recipes give us an insight into Morozova’s culinary interests: the majority of the additional recipes are for feast-day dishes, not everyday staples. It is also interesting that many of them seem unusual for village life: who would expect that biscuits would be a common dish in a village in the Urals?

Other aspects of the text give more of a local flavour: several recipes are named after people, very likely the people from whom Morozova had recieved the recipe. One such recipe is Admirer’s Cake [tort Bakhterki], from a local dialect word meaning “dear one” or “admirer.” Such dialect words are not used in the Molokhovets text, and are unlikely to be found in any printed work. Was this the nick-name of one of Morozova’s friends? Other recipes more obviously come from Morozova’s friends and family, like Tat’iana Ivanova’s Spicecakes and Dunia’s Lazy Cake. This use of social networks to acquire culinary recipes seems to have been common, as discussed by Alun Withey. 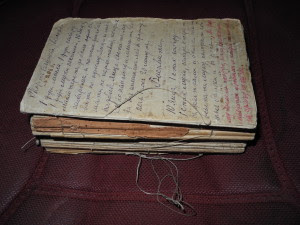 Morozova’s Recipe Book
(Aleksandra Ippolitova)
Interestingly, some of these recipes are very specific about when they should be made. The recipe for Petia’s Braga states:
“On Friday evening stew the hops, on Saturday morning boil half a pail of water, then add to the water 5 funt of sugar and 1 funt of yeast. Pour in the hops, and add a pail of cold water, 1/2 funt of cherries and 1/2 funt of honey. Put it on the stove, fasten it tightly closed, and on Sunday morning take it off the stove and it will be ready to drink in a week.” 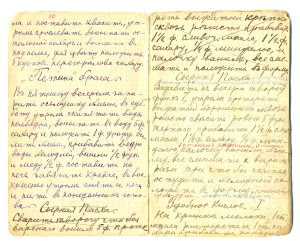 Recipe for ‘Petia’s Braga’
(Aleksandra Ippolitova)
The Morozova text thus brings together traditions often seen as separate: printed works available across the country are put next to locally-collected recipes written in a dialect, big-city dishes appear in village life. Works such as that of Morozova help remind us of the importance of modern manuscripts: far from being a textual-historical dead-end, they were (and are) a central part of people’s everyday lives.
Translation by Clare Griffin.
http://recipes.hypotheses.org/4090
Posted by Cheryl & ethnovet at 17:14