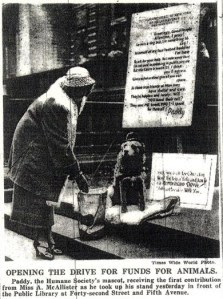 Women couldn’t resist making a donation when they saw Paddy Reilly in his derby hat. Here he’s shown with his owner, Alice Manchester, in 1935. Photo: HSNY
In previous posts, I wrote about the reindeer on display at the Rockefeller Center Christmas tree in 1944, and about the horses that delivered the first public Christmas tree to Madison Square Park in 1912. In this story, I’m going to tell you about the annual Christmas tree and party for New York City’s four-legged critters, which was sponsored by the Humane Society of New York.
But first, let me introduce you to Paddy Reilly, the featured canine in this holiday tale.
Paddy Reilly was a tan and white terrier mix that, his owner insisted, was born on St. Patrick’s Day in 1927. Although he was bred to live the outdoor life in his birthplace of Newport, Wales, his fate changed when, at three months old, he was purchased by Miss Alice Manchester of England. The young woman brought Paddy to live with her in Detroit and Miami before finally settling down in New York City. When Miss Manchester joined the Humane Society of New York in 1933, Paddy became its first mascot.
During his six years as mascot, Paddy was attributed to saving a total of about 10 animals and 40 people, including two kittens — Orphan Annie and Mickey Mouse — that he helped rescue from the bottom of an ash can; two children who were drowning in Miami; 13 people in his Detroit apartment when it caught fire (his fur was singed in this event); and 20 people in his new York apartment building, whom he saved by barking when he smelled escaping gas one night. Paddy won numerous medals for his heroic deeds, including one from movie star Bette Davis, who was once president of the Tailwaggers in Hollywood. 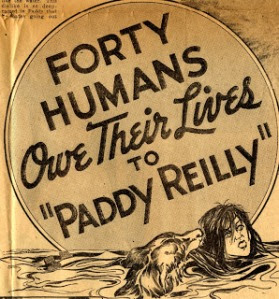 During his six years as mascot of the Humane Society, Paddy was attributed to saving about 10 animals and 40 people, including 2 drowning children in Miami and a woman who was drowning in Jamaica Bay.
Paddy Reilly was also the darling of the New York City media, making annual appearances in the newspapers on his birthday and barking scripts on radio shows. He even served as “Canine Grand Marshall” for the Children’s Day parade at the World’s Fair in 1939. 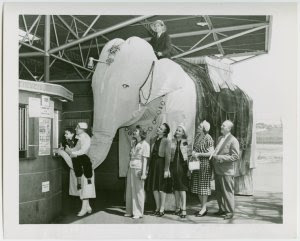 On September 6, 1939, Paddy Reilly served as “Canine Grand Marshall” for the Children’s Day parade at the World’s Fair. One report said the terrier rode astride Rosie, the mechanical elephant shown here, but in fact he just watched the parade from his glassed-in kennel. Photo: NYPL
Paddy’s primarily role was chief fundraiser for the society, in which he helped to raise thousands of dollars in coins and recruit hundreds of new members. He could often be found collecting funds outside the New York Public Library or on Fulton Street at Gallatin Place in Brooklyn. Wearing a straw hat and holding a pipe in his teeth, or donning a comical derby hat given to him by former Governor Alfred E. Smith, he garnered much attention. Women would exclaim, “Oh, isn’t he cute!” and then drop coins in his cup.
The Animals’ Christmas Tree and Holiday Party
During the Christmas holidays in the 1930s, Paddy worked as officiate for the Christmas tree party for horses and indoor holiday party for pets sponsored by the Humane Society. The society began this annual Yuletide event in 1921 to “celebrate all good dogs, cats, and horses” in the city. In early years, the festivities took place at the society’s headquarters at 44 Seventh Avenue (at 14th Street). 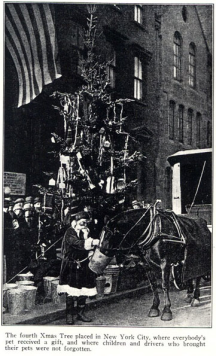 In early years, the Christmas festivities took place at the society’s headquarters at 44 Seventh Avenue and Harry D. Moran, superintendent of the society, played Santa Claus (shown here in 1925) Photo: HSNY.
As hundreds of youngsters and their pets received gifts of leashes, dog biscuits, cans of sardines, and fancy collars indoors, numerous horses and their drivers enjoyed the tree outdoors, which was adorned with horse blankets, bridles, feed bags, and red stockings filled with apples, carrots, and lump sugar. Harry Daniel Moran, superintendent of the Humane Society of New York, would dress up as Santa Claus every year to hand out all the gifts.
In 1933, Paddy’s first year as mascot, all the dogs received collars, leads, and bones; the short-haired dogs also received blankets. Many cats also attended the party, including Whitey, the mascot cat of the Jefferson Market Court, who had been recovering from an injury at the clinic. Whitey and the other cats seemed to enjoy their new collars with bells and cans of sardines (there was no catnip), which were handed out by the society’s vet, Dr. William Dohm, who played Santa that year.
In 1935, the party moved uptown to the Humane Society’s new headquarters in a little red brick house at 313 East 58th Street. To help announce the new location, members of the Kips Bay Boy Scouts, Troop 42, played their bugles and drums to attract a crowd to the tree outside the headquarters. That year, Paddy dressed as Santa and greeted each animal to the event. He first welcomed the horses outdoors – to which he was very friendly – and then greeted the cats, dogs, and other critters “more or less graciously” at the doorway. 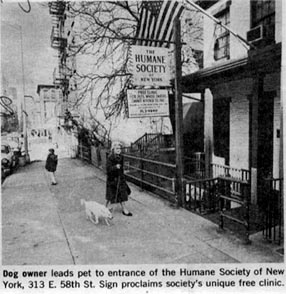 In 1935, the Humane Society of New York moved its headquarters to a little red brick house at 313 East 58th Street. Paddy Reilly’s last birthday party took place here on March 18, 1939. In this photo from the 1950s, it looks like the building had already been painted white, as it is today. Photo: HSNY
In Paddy’s Honor
On September 15, 1939 — just 9 days after he led the children’s parade at the World’s Fair — Paddy passed away from toxic poisoning of the kidneys. A month later, a memorial fund dedicated to Paddy was started to help establish a free clinic for dogs in Brooklyn.
To honor her dog’s passing, Miss Manchester founded the Greenwich Village Humane League in November 1939, with headquarters at 100 Greenwich Street. Each year the league hosted National Dog Week Ceremonies, where members would present a Paddy Reilly Hero Medal to a well-deserving, life-saving dog. Alice dedicated the rest of her life to saving animals, and even lived at the league’s headquarters so she could be available 24 hours a day. 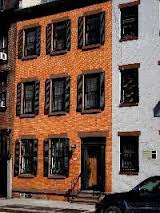 In 1938, the Greenwich Village Humane League moved into 100 Greenwich Avenue, shown here. Alice Manchester moved the organization to 55 Eighth Avenue in 1942, to 40 Eighth Avenue in the 1950s, and to 51 Eighth Avenue in 1960.
During a dedication ceremony at the league’s new Eighth Avenue clinic on December 11, 1942, four-year-old Paddy Reilly Jr., son of Paddy, took over as master of ceremonies.
The Humane Society at 313 East 58th Street
In 1935, the Humane Society of New York moved its headquarters to a little red brick house at 313 East 58th Street. When I found out this house was still standing, I made plans to check it out on a recent weekend romp.
The Civil War–era home was built in 1856-57 by Hiram G. Disbrow, a mason builder who was the first resident of the home. On July 14, 1970, the little house was designated a Registered Historical Landmark. Francis Kelly, a past president of the New York Chapter of the American Institute of Architects, called it a “surviving example of ‘Little Old New York,’” especially with its “noteworthy” porch, which he said is practically non-existent in Manhattan. 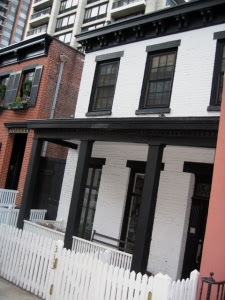 Although the building is only three windows wide and two stories high, it’s really not as small as one would think. In fact, it has 5,400 square feet of living space, including a large restaurant kitchen with walk-in cold storage and prep areas in the full basement. From the Collection of P. Gavan
Years after the Humane Society moved to their new headquarters on 59th Street, the building was home to Le Club, an exclusive dance club that opened there in 1982 and had a membership that included Al Pacino, Pia Lindstrom, and Douglas Fairbanks, Jr. Later, in 1997, the building was home to Two Rooms, an eclectic restaurant and lounge, and then in 1999, the Landmark Club, a restaurant owned by Shamsher Wadud. The property is currently used by Cipriani Sutton caterers for private parties. From the outside, one would not believe how incredible it looks inside — check it out for yourself!