Considerable medicinal plant research in Brazil has focused on indigenous and mixed-race (caboclo and caiçara) communities, but relatively few studies have examined the medicinal plants and associated healing traditions of the descendants of enslaved Africans. This study surveyed the medicinal plants employed by a relatively isolated maroon community of Afro-Brazilians in the Atlantic coastal rainforests of Bahia, Brazil, a global biodiversity hotspot. The studied community is exceptional in that the residents were defacto slaves until several years ago, with no access to western medicine. We examined the following questions: 1) What medicinal plants are used in this community? 2) What are the principal taxonomic groups, life forms, source habitats, and geographical origins? 3) What species stand out as measured by use value and frequency indices? and 4) Is the community’s geographical isolation and African ancestry reflected in their medicinal uses of the local flora?

The study was carried out in the Quilombo Salamina Putumuju maroon community in Bahia, Brazil. Data were collected from May to October 2014 from 74 individuals (37 men and 37 women) by means of semi-structured interviews, walk in the woods, and vouchering of identified species. We used the Cultural Value Index (CV), the Relative Frequency Index (RF), and the Use Value Index (UV) to determine the importance of medicinal plant resources. Continuity of African medicinal plant uses and traditions was determined through self-reporting and comparison with previously published works.

We recorded 118 medicinal plant species distributed in 100 genera and 51 families. The best represented families were: Asteraceae, Fabaceae, Lamiaceae and Myrtaceae. Most plant medicines were used to treat respiratory, digestive systems, genitourinary, and skin problems. The most common medicinal life form was herbs (44%), followed by trees (28%) and shrubs (18%). Native species (55%) were used somewhat more than exotic species (45%), and non-cultivated species (51%) were slightly more numerous than cultivated species (49%). In spite of abundant nearby old-growth forests, trails and gardens were the most common collection sites. A mean of 13.2 medicinal plant species were cited per participant. The highest CV was recorded for Cymbopogon citratus (0.20) followed by Lippia alba (0.19) and Stryphnodendron cf. adstringens (0.17). The highest RF included C. citratus (0.69), L. alba (0.59), and Eugenia uniflora (0.55). The highest UV figures were recorded for S. cf. adstringens (1.68), followed by Sida cf. cordifolia (0.97) and C. citratus (0.93).Fifteen species (13%) of this maroon medicinal flora trace their ancestry to Africa or African-derived healing traditions.

The Salamina maroon community maintains considerable knowledge of the medicinal value of the local flora. However, little of this knowledge is derived from the surrounding old-growth tropical forests. Their pharmacopoeia is a hybrid mix of wild and cultivated species, natives and exotics. Among those species representing the community’s isolation and African ancestry, most are associated with spiritual and magical medicine. 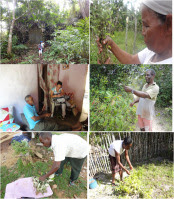