Hypoglycin A (HGA) in seeds of Acer spp. is suspected to cause seasonal pasture myopathy in North America and equine atypical myopathy (AM) in Europe, fatal diseases in horses on pasture. In previous studies, this suspicion was substantiated by the correlation of seed HGA content with the concentrations of toxic metabolites in urine and serum (MCPA-conjugates) of affected horses. However, seed sampling was conducted after rather than during an outbreak of the disease. The aim of this study was to further confirm the causality between HGA occurrence and disease outbreak by seed sampling during an outbreak and the determination of i) HGA in seeds and of ii) HGA and MCPA-conjugates in urine and serum of diseased horses. Furthermore, cograzing healthy horses, which were present on AM affected pastures, were also investigated. AM-pastures in Germany were visited to identify seeds of Acer pseudoplatanus and serum (n = 8) as well as urine (n = 6) from a total of 16 diseased horses were analyzed for amino acid composition by LC-ESI-MS/MS, with a special focus on the content of HGA. Additionally, the content of its toxic metabolite was measured in its conjugated form in body fluids (UPLC-MS/MS). The seeds contained 1.7–319.8 μg HGA/g seed. The content of HGA in serum of affected horses ranged from 387.8–8493.8 μg/L (controls < 10 μg/L), and in urine from 143.8–926.4 μg/L (controls < 10 μg/L), respectively. Healthy cograzing horses on AM-pastures showed higher serum (108.8 ± 83.76 μg/L) and urine concentrations (26.9 ± 7.39 μg/L) compared to control horses, but lower concentrations compared to diseased horses. The range of MCPA-carnitine and creatinine concentrations found in diseased horses in serum and urine were 0.17–0.65 mmol/L (controls < 0.01), and 0.34–2.05 μmol/mmoL (controls < 0.001), respectively. MCPA-glycine levels in urine of cograzing horses were higher compared to controls. Thus, the causal link between HGA intoxication and disease outbreak could be further substantiated, and the early detection of HGA in cograzing horses, which are clinically normal, might be a promising step in prophylaxis. 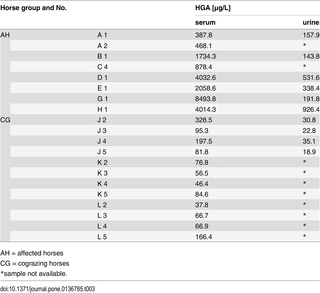 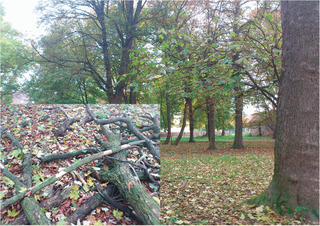 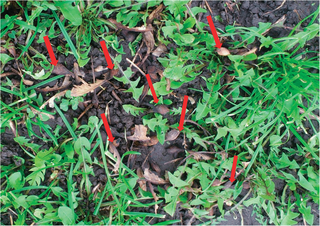 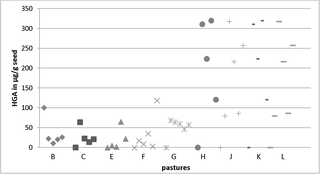 Citation: Bochnia M, Ziegler J, Sander J, Uhlig A, Schaefer S, Vollstedt S, et al. (2015) Hypoglycin A Content in Blood and Urine Discriminates Horses with Atypical Myopathy from Clinically Normal Horses Grazing on the Same Pasture. PLoS ONE 10(9): e0136785. doi:10.1371/journal.pone.0136785
Editor: Ulrike Gertrud Munderloh, University of Minnesota, UNITED STATES
Received: April 17, 2015; Accepted: August 7, 2015; Published: September 17, 2015
Copyright: © 2015 Bochnia et al. This is an open access article distributed under the terms of the Creative Commons Attribution License, which permits unrestricted use, distribution, and reproduction in any medium, provided the original author and source are credited
Data Availability: All relevant data are within the paper and its Supporting Information files.
Funding: The authors have no support or funding to report.
Competing interests: The authors have declared that no competing interest exist.
Posted by Cheryl & ethnovet at 10:07