More than just numbers: Suicide rates and the economic cycle in Portugal (1910–2013)

Under a Creative Commons license

•
We study the relation between suicide rates and Portuguese output.
•
Our dataset has more than a century where we analyze several economic, social and political events.
•
Suicide rates tend to severely increase during times of recessions.
•
In general, males are more sensitive to GDP fluctuations than females.
•
Males react more, on average, to war events.
•
Women are more affected by events related to social stability.

Suicides are a major concern for public health first and foremost because they are an unavoidable cause of death. Moreover, they can be an indicator of self-reported emotional satisfaction and a good marker of overall well-being.
In this study we examine how different economic and social aspects affected Portuguese suicide rates for more than one hundred years (1910–2013). We place this exercise in the specific historical context of the XX and early XXI century in Portugal, emphasizing the role of economic recessions and expansions. Controlling for aspects like wars, health care availability, political instability, and demographic changes, we find a strong association between a decline in the growth rate of real output and an increase in suicide rates for the whole population. In this regard, while male suicide rates are non-negligibly influenced by economic downturns, female suicide rates are in general more responsive to a more open political and economic environment. Our results are robust if we consider the mid-term cyclical relationship.
Our findings advocate that, during recessions, public health responses should be seen as a crucial component of suicide prevention.

The relationship between suicidal behavior and the economic cycle is a major question of debate among social scientists. While it is clear that suicide is influenced by medical, psychological and cultural factors, economic aspects may also play a role. Moreover, if they do, their precise connection is complex. The World Health Organization (WHO) defines suicide as “an act deliberately initiated and performed by a person in the full knowledge or expectation of its fatal outcome”. Already in 2009, the WHO forewarned its concern regarding the potential impacts of the crisis on global suicide rates (WHO, 2009a and WHO, 2009b). In its first report exclusively dedicated to the theme (WHO, 2014), the organization assures that “every 40 s a person dies by suicide somewhere in the world” and that “for each adult who died of suicide there may have been more than 20 others attempting”.
Several researchers estimate that the Great Recession is associated with “at least 10.000 additional economic suicides between 2008 and 2010” in North America and Europe (Chang et al., 2013 and Stuckler et al., 2014). The widespread concern that periods of economic downturn adversely affect health outcomes was however challenged by a series of influential papers by Ruhm (2000, 2003, 2005), Neumayer (2004) and Granados, 2005 and Granados, 2008, who concluded that recessions tend to lower mortality rates.
In this paper we assess how the economic cycle distressed the suicide rate in Portugal, using a long term approach and taking into consideration well-known variables in the literature as well as the specific historical background. We hope that using a sufficiently long economic time series will help us unveil the liaison between the two mentioned phenomena and constitute a rich source for relevant theoretical work and policy prevention. By using the Gross Domestic Product (GDP) growth and the GDP transformed by the Hodrick–Prescott filter, we are able to contrast the effects of short-run and cyclical economic fluctuations in suicide rates.
Fig. 1 covers the evolution of suicide rates and GDP growth rates in Portugal for more than one century long. 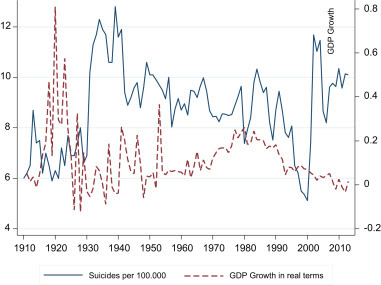 During this period, the country participated in two wars – the World War I and the Portuguese Colonial War (1961–1974) – was ruled under three political regimes – the First Republic (1910–1926), a right-wing Dictatorship (1926–1974), and a period of Democracy (1975–2013) – and underwent a series of profound economic and social transitions. Portugal remained centered on agriculture until late in the 20th century, suffering with high levels of financial volatility, poverty, and illiteracy (68.1% of the Portuguese population was still classified as illiterate in the 1930 census). These coincide with a period of high volatility in GDP growth, as can be seen from the dashed line in the picture above.
Posted by Cheryl & ethnovet at 05:34